Posted on February 20, 2012 by Simon Richardson 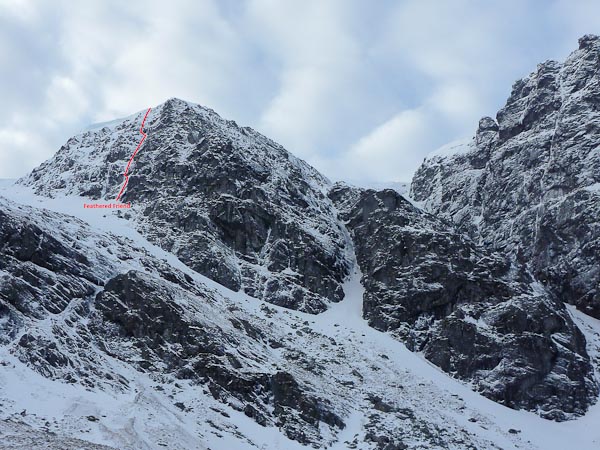 The line of Feathered Friend (V,5), a new two-pitch direct start to Crow Road on Bellevue Buttress on Creag Meagaidh. Recent remains (blood included) of a bird on the first pitch was the reason for the route name! (Photo Ken Applegate)

On February 3, Ken Applegate was working for Abacus Mountain Guides and had a good day out with Vic Wallace on Creag Meagaidh.

“Our initial plan was to climb Eastern Corner (III) and then traverse rightwards to continue up Ritchie’s Gully (IV,4),” Ken told me. “However on reaching the base of Eastern Corner we came across a team of three who were just about to start up it. Not wanting to follow a team up a corner due to the high likelihood of falling ice, never mind the ever pressing issue of time, I decided to head round to the left of Bellevue Buttress, to the base of an icy groove that I had spied on the walk-in. From a distance, it was clear that the line was complete, and looked to be at about upper-end Grade IV/Grade V, so perfect for our day’s objectives.

On arriving at the base of the route, the compelling line looked to be in good condition, so I set off up the first pitch, up steep snow-ice. The snow-ice was generally good, taking a few screws in reasonable ice, and soon I found myself wedged in a small cave, 30m up at the first belay, a convenient wind scoop, capped by a huge block. Good water ice in the back of the cave allowed for a solid, if slightly cramped, ice belay.  From this point, a couple of steep moves left (crux) on good axe placements above the steepening, enabled steady progress out of the cave and with plumb vertical ice dropping away beneath, a healthy dose of exposure was ever present (good screws in solid blue ice protect the moves out left). Moments later, I gained easier angled snow-ice above, before a further 15m of climbing gained belay number two, a good rock belay, 20m left of a huge rock pinnacle.

Pitch three continued directly up a further 50m of sustained Grade IV snow-ice, before reaching another ice belay on the right, in the back of an open cave, again formed by a wind scoop, capped by a couple of large blocks. A steeper section, again of about Grade IV led up and left initially, before gaining the easier angled snow slope above, after which a further 60m gained the plateau.”

It turned out that Ken and Vic had climbed a two-pitch direct start to Crow Road (V,5), an icy mixed route that Ian Parnell and I ascended in November 2004. It is probably better as a pure ice route, and as Ken explained it was “all in all, an adventurous day out, with some great climbing (possibly two stars) up quite a striking line.”