Posted on February 21, 2012 by Simon Richardson 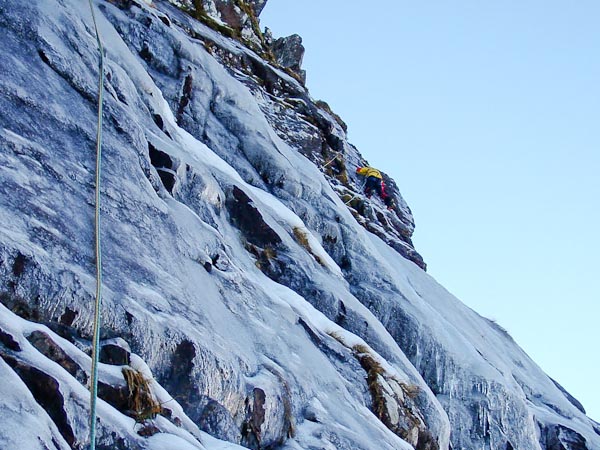 Andy Nisbet making the crucial traverse on blobs of turf during the first ascent of Haggis Raclette (IV,3) on An Tealleach. “Sandy must have been hungry as he had already planned a haggis raclette for the evening,” Andy explained. “Although he never did make it, the idea survived in the route name!” (Photo Sandy Allan)

“The warmer weather had arrived, though not as warm as at present,” Andy Nisbet writes. “I was trying to think of somewhere to go when a post appeared on UKC asking about conditions on An Teallach. Sure enough, someone posted a picture taken the previous day and I couldn’t help noticing ice on a line on Gobhlach Buttress, which I’d tried to solo in 2010. Then I’d backed off when the ice thinned and I reached the point of no return. In fact, I escaped into and climbed Gobhlach Ramp instead. But the new line was still iced despite the thaw and a couple of partners should tip the scales.

When Sandy Allan, John Lyall and I arrived at what is one of An Teallach’s lowest buttresses on February 6, the snow level had risen above its base but we didn’t think there would be complaints when the route was on ice. An icy ramp led up to the base of the crucial ice pitch. Again the ice thinned, but I think this is normal because the water source drips on to the slab rather than flowing from its top. This time, however, I could risk a traverse right on to some blobs of turf. One of these provided a hopeful bulldog (hopeless would be more accurate) but other than that, the ice was too thin for screws but fine for climbing on a slab. Beyond this Sandy and John led a turfy pitch each before we soloed easily up to the top to give the 300m-long Haggis Raclette (IV,3).

Descending the nearby Central Gully, the buttress between it and our route looked attractive and about Grade III, although no one had the energy to try it. A couple of week’s later Jonathan Preston and I were about to start a week’s work on Monday. The forecast was great for the Sunday (February 19) but awful after that. So we persuaded ourselves that we wouldn’t be too tired if we did an easy route, and the buttress came to mind. Driving past the Fannaichs, everything was very white and we were worried about deep snow on the walk-in and on the descent. Despite snow down to sea level, it was never deep and even on the crag it looked good. A wade up to the start in knee deep graupel was slightly worrying but once on the buttress, all went well and the steepest tier even had a turfy chimney which made the route only Grade II. It would have been nice if it had been slightly harder to justify carrying in a rope and rack, but it was a lovely day.”