Posted on February 22, 2012 by Simon Richardson 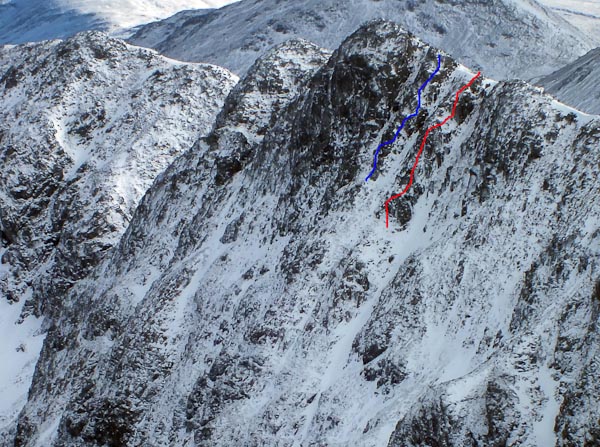 Over the last month James Roddie has made a few solo trips to the unfrequented West face of Beinn Fhada in Glen Coe.

“On February 3 I explored the North-East top of the West face, and found an unrecorded rib about the same length as Micro Rib in Coire nan Lochan,” James told me. “Continuing the insect-based theme of route names on the North-East top, The Gnat (III) seemed appropriate. After downclimbing a snow-gully I moved over to the Summit Buttress, and the crest that forms the Western flank of The Ramp gave a pleasant turfy Grade II that I called The Rampart.

Far more fruitful however was my trip to the Summit Buttress on February 19. A few weeks back on Bidean nam Bian I’d seen through my binoculars a pair of narrow buttresses on the right hand side of the Summit Buttress. They definitely weren’t recorded but I decided to go and see if they were worthwhile.

Identifying features from below is quite a challenge on West face, and it was definitely the case with these two buttresses. But after some exploring I managed to find them, and from below they revealed their true nature – far more distinct and more worthy of attention than they appeared from neighbouring summits.

I chose the right hand buttress first. The route started with a short, steep wall and an awkward narrow corner. After this easier turfy ledges moved up to a second wall that I climbed via a small chimney on the right hand side, though the entire wall looked inviting and of similar difficulty at Grade III. Easier ground led to the ridge crest. I called this right-hand buttress The Rhyme (II/III).

After descending a gully I climbed the steeper left-hand buttress. Similar to The Rhyme, an initial steep wall was followed by turfy ledges – though on the first wall on this route I had a bit of a fright when my left axe ripped out from behind a small chockstone during an awkward move. The crux on this second route was very enjoyable – I climbed a slanting crack up a steep rock wall with quality hooks, and this delivered me to the easier ground above. This steeper route was of slightly higher quality to the first, and I called it Last Orders (II/III).”