Posted on February 16, 2012 by Simon Richardson 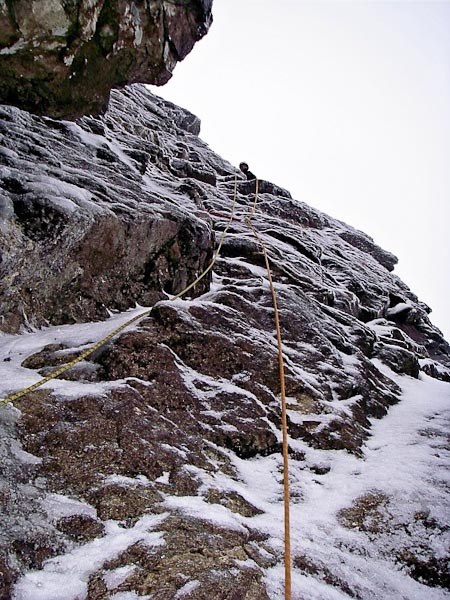 Paul Cunningham on the first ascent of Wildcat Flap (V,6) on the Upper Rake, on Sgurr a’Mhadaidh, Skye. This was one of three new routes climbed on the Skye Winter Meet that was organised by local guide and Cuillin guidebook author, Mike Lates. (Photo Brendan Croft)

Mike Lates organised a very successful winter climbing meet on Skye from February 3-6. Despite a thaw that stopped all play on the Saturday, good icy conditions were found on three out of four days.

On February 3, Paul Cunningham and Brendan Croft climbed Wildcat Flap (V,6) a new route on the Upper Rake, on Sgurr a’Mhadaidh. “We took a sustained line next to the summer chimney of Fox Trap,” Paul told me. “We followed it for a pitch, before branching out onto the right-hand wall. The second pitch started out bold, delicate and technical, and ended with a well-placed and well-protected crux. We called it Wildcat Flap after the discovery of paw prints in the coire, leading all the way up the upper rake and stopping mysteriously at the foot of our climb. As we walked up, following the prints, we had declared that it must be a wildcat, but turned out it was probably a fox!”

The other two new routes fell to Mike Lates and Susan Jensen. On February 3 they climbed High Visibility (VI,6), a ‘continuous line’ on the buttress right of Gully E on Sgurr Thearlaich, and they returned to the same cliff after the thaw two days later to make a direct ascent of Gully E at Grade III. More details can be found on Mike Lates’ blog.