Posted on December 24, 2011 by Simon Richardson 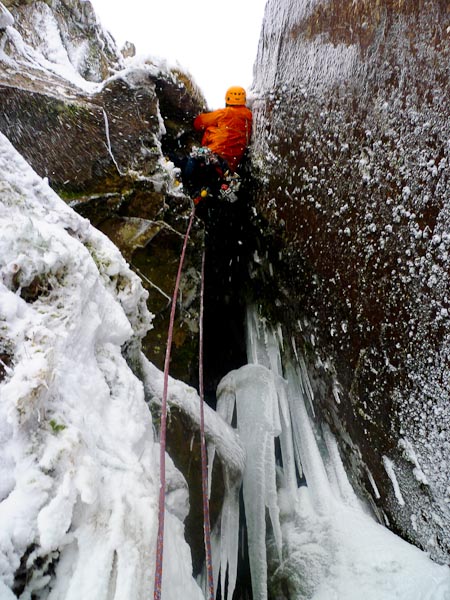 Vince Aerts pulling through one of the many chokestones on the third pitch of Great Overhanging Gully (VI,7) on Beinn Bhan in Applecross. This legendary route was first climbed by Mick Fowler and Phil Butler in 1984, and has seen very few repeats, but it saw two ascents last weekend. (Photo Pete Davies)

At first sight, the North-West Highlands were not a logical choice last weekend, with heavy showers, dumping high levels of snow across the region. Parties attempting the classic Liathach and Alligin ridge traverses were unsuccessful, due to time consuming deep snow and dangerous avalanche conditions at the head of gullies.

Helen Rennard and partner, decided to take the gamble however, and were rewarded with a brilliant weekend. On Saturday December 18, they made an early repeat of Tango in the Night (VI,7) on Sgorr Ruadh, which is reckoned to be one of the best mixed routes on the Northern Highlands. Despite tired legs, they went in to Beinn Bhan the following day, and climbed the awe-inspiring Great Overhanging Gully (VI,7), an archetypical Mick Fowler route, first climbed in March 1984.

“It was the hardest day’s climbing I’ve ever had!” Helen told me afterwards. Helen explained that the walking conditions were tough, but the route was technically demanding as well. I was intrigued, because GOHG was first repeated by Dave Hesleden and Chris Cartwright in February 1994, and it was they who gave it its current two-tier grade. I spoke to Dave and Chris, and they both agreed that they thought the grade was fair. “We weren’t trying to be competitive or anything,“ Chris said. “After all, it was a Fowler route!” But as Chris explained, it was nearly 18 years ago now since they climbed the route (they also made the first free ascent in the process) and couldn’t remember for sure. (I suspect they were both climbing extremely well at the time, as they made the first ascent of Foobarbundy on Liathach the day afterwards (still unrepeated), which at VIII,7 is still arguably, one of the most difficult ice routes in Scotland).

Pete Davies (another very accomplished Scottish winter climber with first ascents of hard routes such as The Brass Monkey and Catriona on Ben Nevis to his name), and Belgian climber Vince Aerts, climbed the route last Saturday, so I asked his opinion.

“We thought it was pretty hard as well,” Pete told me, “because the difficulties are sustained all the way to the top. If The Godfather is given VIII, and Genesis VII, then VI (all be it at the top end of the grade), might be about right, I suppose. The overhangs are always well protected with a few run-outs on the less steep ground in between. I think it’s the best winter route I’ve done. It had everything – Ice, turf, overhangs, spindrift, overhangs, consolidated snow, overhangs, unconsolidated snow, overhangs, night time finish! We had a fly-by from a Golden Eagle as well!”

Pete sent me the photo above, and all becomes clear. Dave and Chris reported good ice on their ascent in 1994, whilst Pete’s photo shows thin and fragile ice, so upward progress last weekend must have mainly relied on rock and frozen vegetation.

Whilst Helen was climbing on Beinn Bhan, Roger Webb and I were having our own adventure on Beinn Damh in Torridon. This Corbett has some long winter climbs on its east face, but Roger knew of a vertical quartzite cliff directly under the summit, so we decided to go and have a look. Unfortunately, the rock was very unhelpful and difficult to protect, but we succeeded on our objective of climbing the curving cleft left of centre, that breaches the central line of overhangs, to give access to an icy groove above. Due to a communication error we carried three ice hooks up the mountain, which was just as well, as they provided all the key protection on the climb. Roger’s name suggestion, The Bulldog Spirit (V,5), was apt in more ways than one!

7 Responses to Great Overhanging Gully and Other North-West Adventures