Interesting Route on No. 4

Posted on December 26, 2011 by Simon Richardson 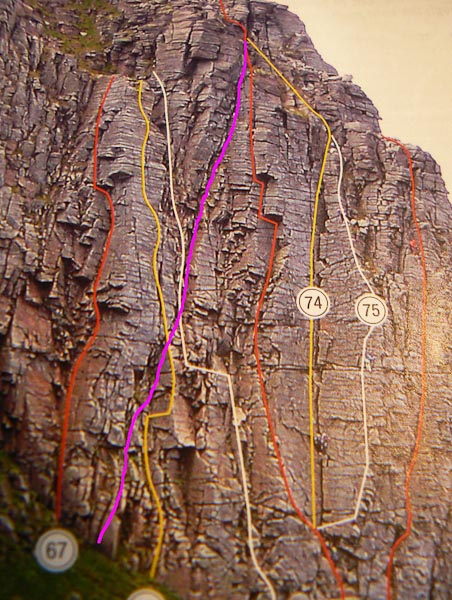 Last Sunday (December 16), James Edwards was tempted away from his beloved Northern Highlands to climb in the Northern Corries, with a surprisingly prominent new route in mind. Unfortunately, it wasn’t to be, but I’ll let James tell the story:

“I have always found the area of No. 4 Buttress near Gaffer’s Groove and Aqualung a bit confusing.  For example, I thought the route When the Wind Blows went up the groove-line parallel to Bulgy. When the new guidebook came out with a very clear diagram of that section of the cliff, I was surprised to see the groove-line untracked, and seemingly nothing to do with When the Wind Blows. I thought this was a bit strange at the time, but gave it no more thought, as I had other routes to keep me busy for a while. However last weekend fates conspired for a short Northern Corries day, so Martin Hind and I went to have a look at that bit of the cliff.

Martin started up the corner of Aqualung, and after clipping an in-situ peg whilst crossing Gaffer’s Groove, he decided to continue on rather than belay there. He continued on up the ‘unclimbed’ groove, which was a funnel for the spindrift making for very unpleasant insecure moves on God knows what, with eyes closed due to the snow blowing around.

Martin soon completed a full 60m of climbing and reached the easy ground that joins the top pitch of Bulgy. I stripped the belay and wore two sacks to climb, as neither of us fancied descending the Couloir. I recognised the moves on the start of Aqualung, but the powder swim up the groove-come-chimney was new to me. I led through and climbed an easy pitch to gain the plateau, where I must have looked like a very strange genetically modified snail, with my two large sacks on my back! When Martin came up he met an old friend Ewen Todd, and partner Rab, coiling their ropes after topping out to Western Route. Martin told me that he hadn’t seen Ewen since punching him at a party in Glasgow in the 1980s, and thought that he had better apologise, as Ewen looked a bit bigger than him now! It’s funny, the old friends that you bump into in the Corries.

It turns out that of course, that the groove had been done before, probably first by Rab Anderson and certainly by Guy Robertson, Pete Benson and Es Tressider. It all stemmed from a slight error in the original SMC guidebook where the summer line of Gaffer’s Groove (the one we climbed), was never marked, but the winter version of it was, which takes a different line. The combination of Aqualung, Gaffer’s Groove and Bulgy does take a very strong natural feature up the cliff however, and could be worth noting for those No. 4 Buttress aficionados who are running out of things to climb at a mere mortal grade V,6 or thereabouts.”

8 Responses to Interesting Route on No. 4