Posted on December 21, 2011 by Simon Richardson 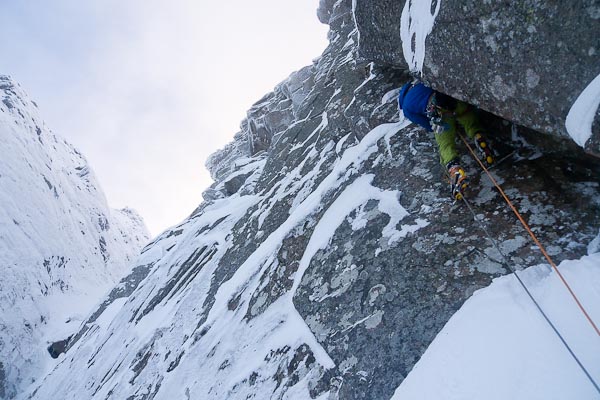 Greg Boswell on the second pitch of Scarface Wall (VIII,8) on Lochnagar. This steep mixed route, which curves leftwards across the impressive steep right wall of Raeburn’s Gully, was first climbed by Guy Robertson and Ian Parnell in April 2006. (Photo Will Sim)

Fresh from their outstanding success on Stone Temple Pilots on the Shelter Stone, Greg Boswell and Will Sim visited Lochnagar on Sunday December 18. Their intention was to make the second ascent of Crazy Sorrow (IX,10), which received its first full winter ascent in the hands of Guy Robertson and Pete Benson last season. (The crux pitch had previously been climbed by Alan Mullin and Steve Lynch, but they abseiled off without climbing the difficult third pitch and did not complete the route).

Will added a more difficult entry pitch, before Greg pulled over the crux roof but decided that the upper part of the pitch was not sufficiently icy. The pair decided to retreat, and by way of consolation, they climbed Scarface Wall (VIII,8), a Guy Robertson-Ian Parnell creation on the right wall of Raeburn’s Gully. They completed the first three pitches (all the independent climbing) to join The Straight-Jacket, before deciding to abseil back into Raeburn’s Gully to reach their rucksacks as it became dark. I’ll leave the ethics on whether this constitutes a true second ascent or not, to others, but since the 1980s there has been a tradition of abseiling down from difficult routes on Lochnagar (i.e. on The Pinnacle and Tough Brown Face) once easy ground has been reached. (Unfortunately, Alan Mullin and Steve Lynch did not climb as far as easy ground on their Crazy Sorrow attempt in 2002).

A steady flow of routes have been climbed on Lochnagar so far this season including Quick Dash Crack, Spellbound, Transept Route and Shadowlands. Pete Davies, Tim Marsh and Donnie O’Sullivan made an ascent of The Link Direct on the Pinnacle, and on the Tough-Brown Face, Dave Almond and Simon Frost climbed Tough Guy, taking the corner direct on the second pitch, and suggesting an overall grade of VII,8. They also dismissed the 1980s Lochnagar tradition, and climbed the full height of the cliff, to finish on the plateau.