Posted on December 16, 2011 by Simon Richardson 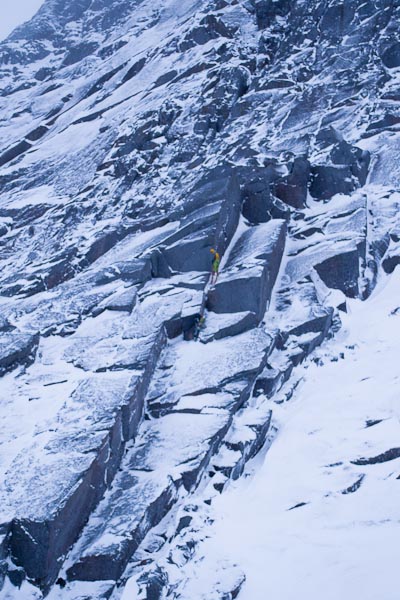 Greg Boswell (belaying) and Will Sim on the second ascent of Stone Temple Pilots on The Shelter Stone. This eight-pitch route is generally acknowledged to be the most sustained winter route climbed in Scotland to date. (Photo James Dunn Visuals)

Yesterday (December 15), Greg Boswell and Will Sim notched up a highly significant ascent with the first repeat of Stone Temple Pilots (X,9) on the Shelter Stone. This route, which links the summer lines of Steeple, Haystack and Spire directly up the front face of the crag, was first climbed by the highly accomplished duo of Guy Robertson and Pete Macpherson, only last season.

Greg and Will left their car at 3:30am, started climbing at 6:30am by head-torch and overall spent about spent 14 hours on the climb.

“The route was the most physically challenging climb I’ve done in winter, due to how fiercely sustained it is and also its length,” Greg told me. “I was literally falling asleep on the penultimate belay as I was so tired, but knowing I had another hard pitch to do after that one made me fuel up on Haribo and fight the fatigue. We finished under an amazing starlit sky with an awesome view of Loch Avon under the bright moonlight.

I managed to on sight the whole thing, but only by the skin of my teeth. The crux pitch would be worth hard IX,9 in its own right, let alone with seven more hard pitches, most of which are VIII or higher, to contend with as well.”

Greg was full of praise for the first ascensionists:

“It was an awesome effort by Guy and Pete on the first ascent, forging a direct line up the huge face and taking in all that hard climbing. It just shows how dedicated and inspiring these two are.”

Once he heard the news, Guy Roberson immediately emailed me with his reaction.

“I’m speechless, and so, so impressed. It took me twenty years to get to that route, Simon – it’s taken Greg two seasons! Brilliant – just absolutely brilliant.”

One senses that Greg and Will are just getting into gear, and many more great ascents are just around the corner:

“Wait and see what we have planned for next week!” Greg told me.

Simon Richardson is a passionate Scottish winter climber
View all posts by Simon Richardson →
This entry was posted in Repeats and tagged Greg Boswell, Shelter Stone, Will Sim. Bookmark the permalink.