Ride of the Wild Bullhorn

Posted on December 19, 2011 by Simon Richardson 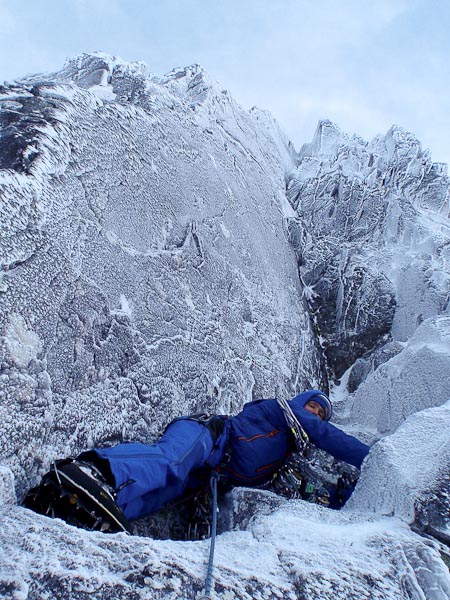 Nick Bullock on the third pitch of Ride of the Wild Bullhorn (VIII,10) on the East Flank of Tower Ridge, Ben Nevis. An unusual ‘press up position’ was required to enter the crux groove looming above. (Photo Dougal Tavener)

On Friday December 16, Nick Bullock and Dougal Tavener climbed a new route on Ben Nevis to the left of The Pretender – a line added by Nick with Andy Turner and Bruce Poll to the East Flank of Tower Ridge, right of The Great Chimney, last season. The three-pitch 55m-long route starts as for the Pretender and then takes the impending corner to the left. Overall the route was graded VIII,10, and I suggested to Nick that the route sounded ‘very fierce’ (as Alan Mullin would have said):

“Yeah, it was pretty fierce for sure,” Nick replied. “It was George Smith territory in winter – knee bars, hand jams and pretty savage pulling. I felt it was pretty committing as we didn’t have the correct peg sizes for the start of the overhanging madness, but a nut placed blind in a flake from a body trembling position gave me enough to go for it. The gear was great after that, although it was all put in hanging off hand jams and a knee bars, and all the time I had to keep swapping hands to de-pump… and then came the crux! This was a truly steep pull off a not so good hook/torque, but a double hook around an icicle saved the day as I was unbelievably pumped and thought I would throw up… I must be getting too old for this… or maybe not!”