Posted on December 20, 2011 by Simon Richardson 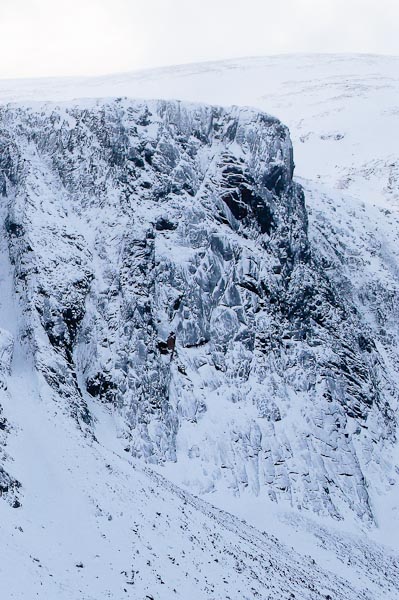 Shelter Stone Crag in the Loch Avon Basin, Cairngorms. Citadel (VII,8) takes a line just left of the right edge. The V-corner alternative exit (useful when the upper exit cracks are rimed over) can be seen above a small diamond-shaped snow field just below the plateau and left of the crest. (Photo Simon Richardson)

Sticil Face has had numerous ascents already this season, Stone Temple Pilots had its first repeat by Greg Boswell and Will Sim last week, and The Needle was climbed by Martin Moran and Murdoch Jamieson on Friday December 16. Although The Needle was one of the first ever Grade VIIIs climbed, Martin’s account on his blog makes it clear that despite over 25 years since the first ascent, this route is still a very demanding expedition.

“Make no mistake The Needle is properly hard,” Martin wrote. “There are grade VIIIs and grade VIIIs; if you do a short test piece like The Secret on the Ben and imagine that you’ve mastered the grade, I respectfully urge you to think again.”

On Saturday December 17, Jim Higgins and Neil Adams made an ascent of Citadel. This route is considered to be a touchstone Grade VII and a rite of passage for aspiring Scottish winter climbers. Again, their ascent proved to be a gruelling affair, and Jim has written a gripping account on his blog. Jim and Neil ground to a halt in sea of rime above the second crux unable to find the summer exit cracks. Several other teams have encountered the same problem (Robin Clothier and I struggled here too in December 1988 before the moon came out allowing us to top out), but the best option is to take the Moonlight Finish that leads up mixed ground up and left to a large ledge near the final chimney of Sticil Face and then finish by a steep V-corner on the right. This is not described in the guidebook, but has now become the established alternative exit.