Posted on December 23, 2011 by Simon Richardson 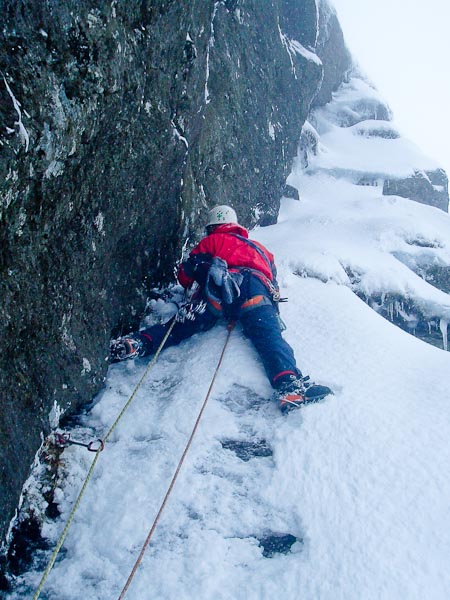 Stuart McFarlane on the fourth pitch of Hogwart’s Express on The Brack on Arrochar. This steep mixed route climbs the right edge of the slabby wall right of Resolution, and finishes up the final pitches of the summer route Mainline. The final section, as shown in the photo is also the crux pitch of last year’s addition The Elephant Train. (Photo Stuart Burns)

On Sunday December 19, Stuart Burns, Erick Baillot and Stuart McFarlane, repeated Hogwart’s Express (VI,7) on The Brack. This fine looking route was first climbed by Andy Clarke and Frank Yeoman in January 2001, and is a very steep line taking the right edge of the Resolution wall, finishing via the top fault of the summer E2 Mainline.

“The route was not adorned with secure protection on the first three pitches,” Stuart M told me. “It was more VI than 7!”

Stuart B (‘Burnsie’) agrees. “I thought it was VI,6 and high in the danger grade and low in the technical grade. Andy Clarke gave it VI,7 on the first ascent. I suspect we had more ice on our ascent, which had been forming from the snow melt – helpful for teetering up slabs when it sticks on, but not so helpful if you can’t find any gear!”

Other Arrochar news is the third ascent of Direct, Direct (VII,9) on The Cobbler, by Andy Sharpe and Garth. They made a well-timed ascent, climbing this Arrochar test-piece on Saturday December 10 under a good covering of hoar frost.

Simon Richardson is a passionate Scottish winter climber
View all posts by Simon Richardson →
This entry was posted in Repeats and tagged Erick Baillot, Stuart Burns, Stuart MacFarlane, The Brack. Bookmark the permalink.