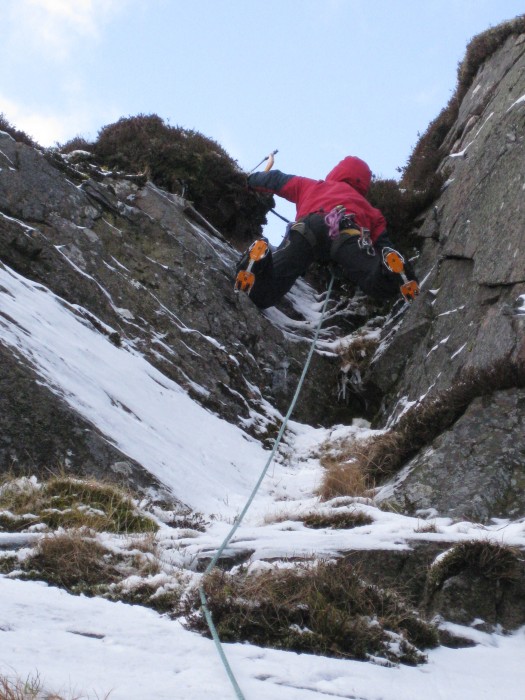 Helen Rennard climbing easy ground above the crux section of Gaddzooks (VI,6) on Creagan a’Choire Etchachan. This mid-height crag does not often form good ice, but Andy Nisbet believes that conditions last weekend were the best for over 30 years. (Photo John Lyall)

Lured by good icy conditions after their recent ascent of Kukri on Creagan a’Choire Etchachan, Andy Nisbet and Helen Rennard returned on Saturday January 21, this time accompanied by John Lyall. They came away with the excellent Gaddzooks (VI,6), an ascent of the original summer line of Avalanche Gully taken by Mr. and Mrs. Gadd in 1955, which follows a groove system left of the main gully line. Andy takes up the story:

“This old man was surprised to make it to Creagan a’ Choire Etchachan in only two and three-quarter hours from the Car Park, but young Helen was just as far ahead and middle-aged John in his correct position. Conditions on the classic ice routes were quite thin but I was amazed to see thin ice down the back of The Dagger while Djibangi had only a smear. The Dagger was in the best condition I’d seen since the first ascent in 1977, and certainly climbable. I remember [on the first ascent] having to always place one foot above the other as the ice wasn’t wide enough for conventional climbing, but the ice was excellent quality and looked much the same today. I seem to remember an old peg in the wall making life less scary but I’m sure that’s rusted away.

The good ice on Saturday was enough to tempt us on to the front face where there might be less snow, and turning the corner made us happy, as the first pitch of Avalanche Gully had thick ice and the subsequent grooves on the left which we intended to climb had been recessed enough to survive the thaw. I’d known about the line for years but to get good walking and climbing conditions wasn’t so easy. John had taken his blunter crampons and Helen wanted the hard pitch, so I led up the ice and belayed at the base of a crack up the left wall under the main overhang which blocks the gully and needs conditions like 1986 to form.

I actually did Helen no favours as her pitch turned out to have three right angles and brought her to a reluctant halt below easy ground. She cruised up the technical crux and also the groove before spotting some old steel pegs presumably from the original summer ascent by Mr. and Mrs. Gadd. One at least was positioned like it had been used for aid, but the route was never written up properly. Despite being 55 years-old they were still in passable shape and she climbed past them to traverse into a big ramp on the right (parallel to the one Avalanche Gully finishes up). Now rope drag increased and a belay was taken. Continuing the first pitch up the crack would have improved matters a lot (in hindsight). But despite an uncomfortable position, the main difficulties were over and the top of the ramp gave a nice pitch leading to the upper section of Pioneer Buttress.

John came up with the name, ‘Gaddzooks! the Gadd pegs were still there!’”