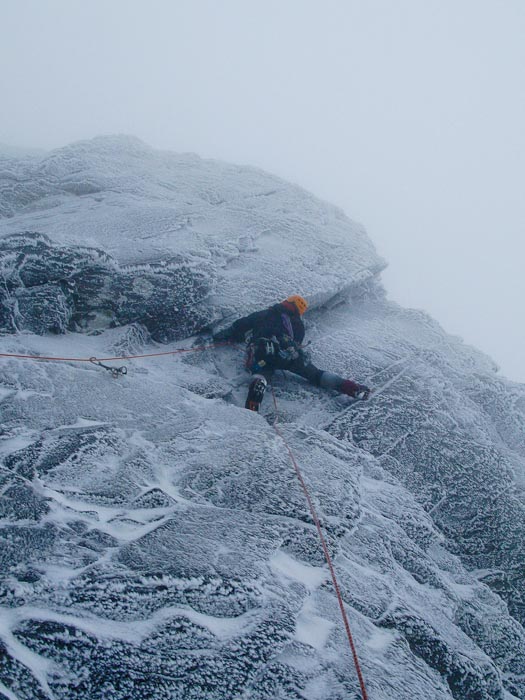 Iain Small gaining the foot of the hanging groove on the first ascent of Goodfellas (VII,8) on Ben Nevis. This six-pitch route climbs the impressive front face of Pinnacle Buttress of the Tower. (Photo Simon Richardson)

Pinnacle Buttress of the Tower on Ben Nevis has fascinated me for years. It is an elegant feature running up to the Great Tower from Coire na Ciste just to the left of Glover’s Chimney. Way back in 1996, I realised that the Bennet-Tait Grade III avoided the buttress completely and climbed grooves to the right, so that March, Chris Cartwright and I set out to climb the crest of the buttress itself.

The result was Stringfellow, a sustained VI,6 that takes a zigzag line up the buttress. It was our first foray into mixed climbing on the Ben and felt very adventurous with success in the balance until the very end. The route is one of my favourite climbs on the mountain with some good climbing in a great situation, but it doesn’t climb the true crest of the buttress. I’ve been back to PBOT several times since and added more routes, such as Face Dancer (VI,6), which teeters up the bold slabs on its left flank, and Butterfingers (V,6) finds its way up the hidden chimneys on its right side. Chris and I returned in March 2001 with the intent of climbing a direct line up the crest, but although Smooth Operator (VI,7) contained some fine climbing, it is essentially a direct line up the right flank rather than the crest.

After Smooth Operator, I put the idea of a direct out of my mind until a couple of years ago when I noticed a hanging groove that cut up onto the very crest of the buttress from the left. Could this groove be the key?

Iain Small and I went up to have a look on Friday January 21. We approached the first terrace by the slanting icy grooves of Fatal Error, and then I led a series of corners straight up from the beginning of the Stringfellow ramp to near the base of the hanging groove. From here, the groove looked very steep. It sloped the wrong way with no apparent footholds and was defended at its base by a blank-looking slab. But we were there now, so Iain set off and soon uncovered a hidden rail that allowed him to delicately balance across the slab to the foot of the groove.

Conditions on the mountain were probably too icy in places for hard mixed, but the groove was sufficiently overhung that the cracks at the back of the groove were free of ice and took a couple of small cams as some much-needed protection. As suspected there were few footholds, but the freeze-thaw cycle of the past few days had coated the rock with a layer of icy rime that would not quite hold body weight, but was enough to relieve some of the tension in the arms. Iain made a beautiful lead, gently easing himself up the groove to a good niche.

I led up through the niche and onto the rounded buttress crest, and then we entered the left-hand crack and groove system above to join Stringfellow just below its final headwall. We reached the foot of the Great Tower just as it was getting dark, and then three pitches up Tower Ridge took us onto the plateau.

So is this the final solution to Pinnacle Buttress of the Tower? It is for me I suspect, but I did catch Iain peering down the overhanging ground dropping away beneath him as he seconded the fourth pitch, so I suspect the PBOT story will run and run!