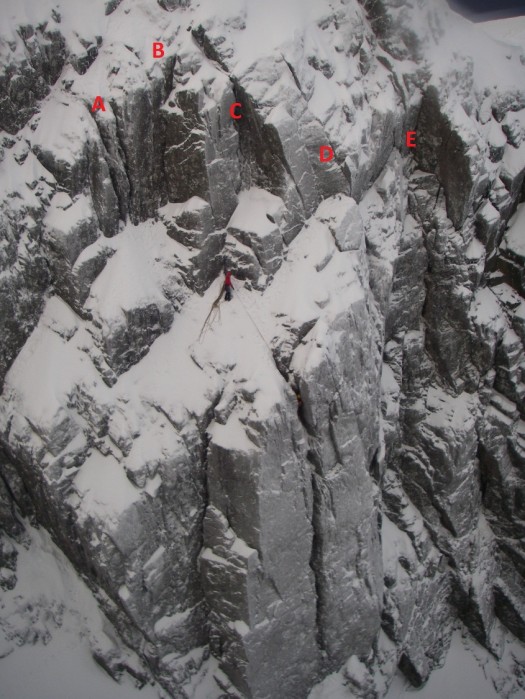 Simon Yearsley sent me the above photo the other day asking me to clarify the finish to Darth Vader, so I’ve labelled the exits of DV and its surrounding climbs as they were climbed on the first ascents.

I suspect that the finishes to Darth Vader and Cornucopia are often inter-changed. When Chris Cartwright and I climbed Cornucopia in April 1996 (the first route to gain the platform below these finishes) it was dark, so we fumbled around in the dark before climbing Finish D. The following March when we climbed Darth Vader, we finished up A, as it was the other obvious exit. Both finishes are a little harder than they look and weigh in at about Technical 6.

Simon noted that when he climbed Darth Vader with Malcolm Bass on March 17 2008 he took Finish C. “It was probably at the same sort of grade as the DV crux pitch,” Simon told me. “When we did it, it had a useful smear of ice down the top of the right wall which you could dynamically stick from just below the topmost part of the corner.”

Neil Silver and Simon Davidson, who climbed Darth Vader last Saturday, also took Finish C, but this time there was no useful smear of ice, and they thought it to be a tough pitch.

So, I’m intrigued how other folk have finished Darth Vader, and whether Finish C has been climbed many times before – please drop me an email or leave a comment.

Simon Richardson is a passionate Scottish winter climber
View all posts by Simon Richardson →
This entry was posted in Commentary, Topos and tagged Ben Nevis. Bookmark the permalink.