Posted on January 9, 2021 by Simon Richardson 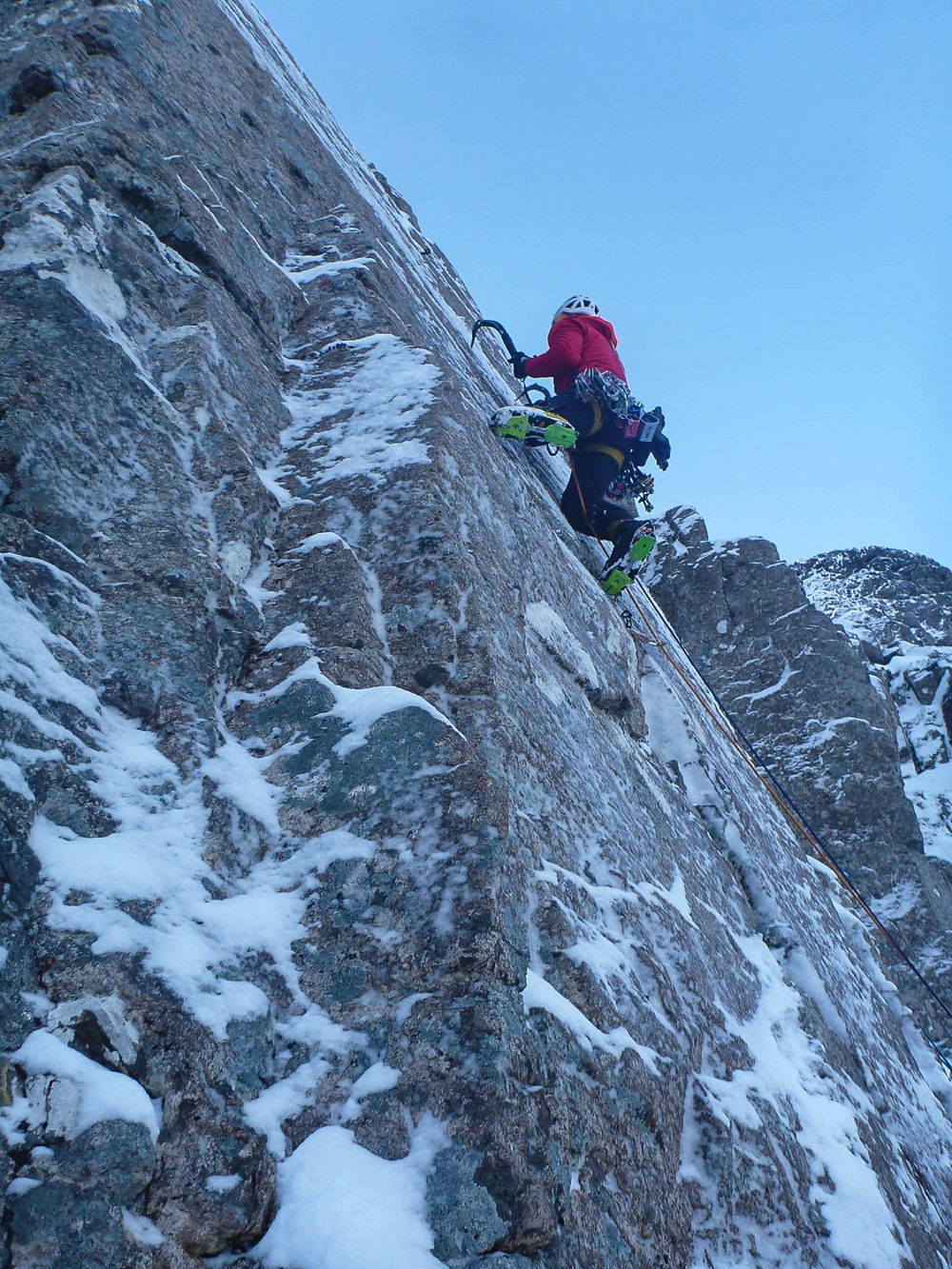 Dave MacLeod on the first winter ascent of Rose Innominate (IX,9) on the West Face of Aonach Dubh in Glen Coe. This pitch climbed more of a seam rather than a crack, with axes resting on dirt rather than hooks – a bold lead. (Photo Helen Rennard)

While Mainland Scotland is in full lockdown, I do not feel it is appropriate to report ongoing winter climbing activity on scottishwinter.com, so I’m using this post to catch up on recent weeks. The extended spell of cold and snowy weather over Christmas and New Year led to a high level of activity across the Highlands. To maintain the record, I have summarised all new ascents (that have been reported to date) climbed up until the January 4. Please continue to send me details of new routes for publication in the SMC Journal.

Northern Highlands: Back in early December, John Higham, Iain Young visited Canisp where they made a winter ascent of North Rib (II/III) the prominent feature tat drops north from the summit shelter. Later in the month, Callum Johnson and Andy MacKinnon visited Barrel Buttress on Quinag on December 28 and came away with the first winter ascent of the summer E2 Beefhart. This excellent VII,7 was described as “well protected, steep with a real out there feeling.” Further South that day, Tim Miller, Jamie Skelton made the first winter ascent of Groovin’ High (VII,8) on the Far East Wall on Beinn Eighe.Excellent cracks and good hooks meant the climbing was enjoyable as it is in summer.

The Cairngorms: On December 24 the Cairngorm ski road was closed due to Covid restrictions, which limited activity in the Northern Cairngorms. Undeterred, Erick Baillot and Dave Kerr approached Lurcher’s Crag on skis on January 4 where they made an ascent Shapeshifter (VIII,8). They reported it to be an excellent climb, but possibly a little over graded and accessible to more climbers than the rating suggests. A month earlier they visited the same area of crag and repeated Rottweiler (VI,7) adding the Mongrel Mutation Finish (V,6). On the South side of the massif, Dan Moore and Martin Stephens found a Direct Variation (V,5) to the central section of Moonshadow on Lochnagar, and in Glen Clova, Dave Slade, James Lamont discovered Get Into The Groove (III,4). This takes the right side of Waterfall Buttress high up on the left side of Winter Corrie.

Central Highlands: The high amounts of snow meant climbing on Ben Nevis was hard work. Ascents were made of the classic ridges, but by far the most popular venue was the Douglas Boulder. Nearby, Huw Scott, Nathan Adam added The Final Fowl (IV,6) on the right wall of West Gully. Nathan was also active in Coire Dearg on Mullach Nan Coirean in the Mamores. At the end of December, he climbed Positive Education (III,4) with Cameron McIlvar, the wide gully just right of the left edge of the crag. He returned three days later to add Triple G (III), the shallow curving gully just left of centre.

Southern Highlands: The ever-tightening travel restrictions prompted many climbers to look for winter venues closer to home which has resulted in some interesting ascents. On January 2, Rosie Rothwell, Joe Barlow climbed Frosty Peat (I/II), the broad buttress 500m south of Arrow Buttress on Meall Nan Tarmachan. Two days later, the same pair added Hexellent (II) and Ba Buttress (III) to the left side of Coire Ban on Meall A’ Choire Leith. On Ben Lomond, Sam Wainwright and Sebastian Wolfrum found Break Dance (IV,5) on the rightmost buttress in the corrie. Finally, on The Upper Tier of The Brack, Ole Kemi, Stuart McFarlane made a fine discovery with End Of The Line (V,7), which takes the wall between Elephant Train and Elephant Gully.

6 Responses to Lockdown Catch Up