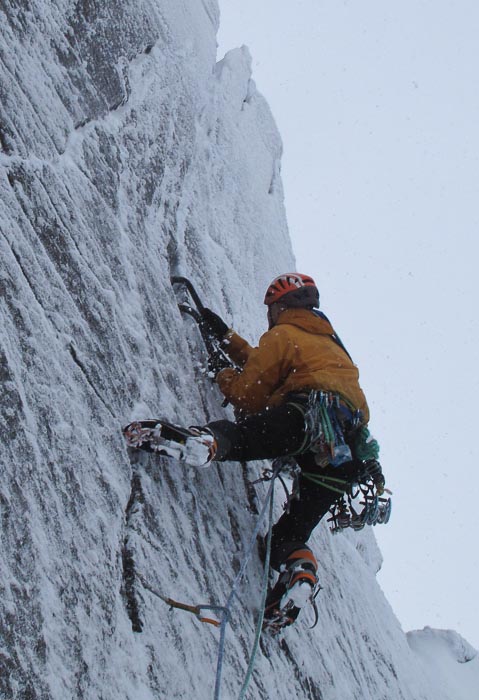 Martin Moran in his element – on the front end during a technical winter first ascent. Omerta (VIII,9) was climbed with Pete Macpherson in November 2010 and is considered to be one of the more challenging test-pieces in the Northern Corries. (Photo Pete Macpherson)

Last year was a terrible period for Scottish mountaineering with Andy Nisbet and Steve Perry’s accident in February, and then three months later, Martin Moran was lost in the Indian Himalayas. Personally, I found it difficult to reconcile that three great climbers had been lost in such a short space of time, so as a result, this tribute to Martin is well overdue.

Martin’s achievements were so far ranging from Scotland to the Alps, and Norway to the Himalayas, that I have only summarised Martin’s Scottish contribution below. A full obituary will be published in the 2020 Alpine Journal. Many people have already paid tribute to Martin – Ian Parnell has written a detailed obituary for the Himalayan Journal and a series of tributes will appear in this year’s Scottish Mountaineering Club Journal.

Martin was born in 1955 and was brought up on North Tyneside. His parents had a love for the hills and holidays were taken in the Scottish Highlands and the Lake District. Later, Martin spent his teenage years exploring the Cheviots and camping with the Scouts. He studied Geography at St Catherine’s College Cambridge and became a chartered accountant, but the hills and mountains continued to be a major draw. Martin was a fast learner. He made his first winter visit to the Scottish mountains in December 1978 and three years later he had climbed the North Face of The Eiger. His mind was made up – he would become a mountain guide. In 1982 Martin joined the British Mountain Guides training scheme having negotiated an annual three months leave of absence from his accountancy job.

During the winter of 1984/85 Martin put himself on the map with the first winter round of the Scottish Munros. Supported by his wife Joy, Martin walked over 1000 miles over 83 days and made 150,000m of ascent to complete the 277 summits. Apart from the Cuillin on Skye, the Munros do not involve technical climbing, but in winter they are a serious mountaineering proposition. To put the achievement into context, a winter Munro round has only been completed twice since.

Martin qualified as a British and IFMGA Mountain Guide in March 1985 and six months later he set up his guiding business with Joy, in Lochcarron, in the North-West Highlands. The Winter Munros had caught the public imagination and he immediately attracted clients. Guiding in the North-West Highlands was tough with longer approaches than Glen Coe or the Northern Cairngorms, but Martin was interested in attracting a more adventurous brand of client. His brochure advertised ‘visits to remote corries with potential for new routes’ and that promise was fulfilled with the first ascent of Crown Jewel (IV,5) on Beinn Alligin with Nigel Adey and Mick Guest in March 1986. Martin went on to record dozens of new routes with other course attendees.

In the mid 1980s the North-West Highlands had not been thoroughly explored as a winter climbing venue and there were countless opportunities for exploring new ground. As Martin’s business grew he took on other guides and mountaineering instructors. Not surprisingly, Andy Nisbet the most prolific Scottish winter climber of all time, took on the remit of exploring new ground to heart, and made many first ascents with clients on Martin’s courses.

I first met Martin on his local mountain Fuar Tholl one glorious Saturday afternoon in February 1994. Dave Hesleden and I had just completed a new ice climb on the South-East Cliff and bumped into Martin on the summit. Martin introduced himself and asked what we had just climbed. He knew the line, of course, but said he’d ‘forbidden’ Andy to climb the route and was going to have a go himself later in the week. For many climbers having a line plucked from their home ground would have been a considerable disappointment, but Martin acted with grace and charm and warmly congratulated us on our ascent.

Martin’s contribution to Scottish winter climbing was enormous. He climbed well over a hundred new routes, many at the highest grades. “There are many impressive winter cliffs in the Torridon Highlands”, he wrote, “but only three can be described as truly awesome – Fuar Tholl’s Mainreachan Buttress, the West Central Wall on Beinn Eighe and the Giant’s Wall on Beinn Bhan. All are places where a significant grip factor is added to the intrinsic difficulties of the climbs.”

And it is on these three walls that Martin’s most celebrated new Scottish routes lie. In 1989 he climbed Reach For the Sky (VII,6) on Fuar Tholl, and in 1993 he succeeded on the Blood, Sweat and Frozen Tears (VII,8) on Beinn Eighe. But a new line on Beinn Bhan’s huge Giant’s Wall on the left side of Coire nan Fhamhair eluded him, until March 2002, when he breached the impressive unclimbed terrain between Gully of the Gods and Great Overhanging Gully with Paul Tattersall. Moran first spotted the great corner splitting the upper section of the cliff, thirty years before when he visited the corrie as a 17 year-old Scout on a camping trip. The Godfather (VIII,8) provided a huge struggle, especially when both headtorches failed as they were climbing into the night, but it has now seen several repeats and has become one of the most prized routes in the Northern Highlands.

A notable aspect of Martin’s new routing was his creativity. In March 1989 he soloed Das Rheingold, a girdle traverse across Beinn Bhan’s four corries. With over 2.8km of sustained climbing up to Grade V across little known terrain, it was a bold step into the unknown. Other notable successes include the first ascent of Storvegen (VI,8), a spectacular 200m-long ramp-line on the big cliff behind the Old Man of Storr on Skye, and the first winter ascent of the continuously overhanging Hung Drawn and Quartered (VIII,8) on the North Face of Am Basteir.

Martin moved with extraordinary speed in the mountains, and in June 1990 he set a new 3h 33m record for the Cuillin Ridge, beating the previous time by an astonishing 17 minutes. This fitness translated to the Alps where he climbed many Grandes Courses including a very fast 36-hour ascent of the Peuterey Integrale. Without doubt, Martin’s outstanding alpine achievement took place in the summer of 1993, when he climbed the 75 major 4000m peaks in a single journey with Simon Jenkins. They covered over 1000km on bike and foot, and made over 70,000m of ascent in 52 days.

Martin’s winter climbing showed no sign of slowing down with age. In late 2010 he had a superb run of routes resulting in two new Grade VIIIs and a Grade IX. His campaign started with the first ascent of Omerta (VIII,9) in Coire an t-Sneachda with Pete Macpherson. Soon after, the pair made the fifth ascent of The Secret on Ben Nevis (VIII,9) before making the second ascent of The God Delusion (IX,9) on Beinn Bhan, widely regarded as the hardest route in the Northern Highlands. Later that December he teamed up with Murdoch Jamieson and Francis Blunt to make the first winter ascent of Feast of The East (VIII,9), a summer E1 on the Eastern Ramparts of Beinn Eighe. A few days later he was with Jamieson again to climb The Wailing Wall (IX,9) on the awe-inspiring left side of Haystack Gully on An Teallach. This was one of the first Scottish Grade IX first ascents to be climbed on-sight.

Martin wrote in a fluid and entertaining style and authored several books. His magnum opus was Scotland’s Winter Mountains, a thoroughly researched treatise on how to survive, walk, climb and ski in the Scottish mountains in winter.

Martin was still setting the pace just months before his accident, and in February 2019 he made the first ascent of Scarred for Life (VIII,9) on Beinn Eighe with Robin Thomas. This route lies on the rarely visited North Face of Sgurr Ban and was arguably the most adventurous pioneering climb of the Scottish winter season.

Martin’s achievements whether hill walking, fell running, winter climbing or as an alpinist were both ground breaking and inspirational. Nobody will ever know exactly what happened on that fateful day on P6447 in the Indian Himalayas on 26 May 2019, but it is possible that a cornice collapse triggered the massive avalanche that swept away Martin and his seven companions. One thing is for certain – Britain had lost one of its finest ever mountaineers.

Simon Richardson is a passionate Scottish winter climber
View all posts by Simon Richardson →
This entry was posted in Commentary and tagged Martin Moran. Bookmark the permalink.