Book Review – Tears of the Dawn 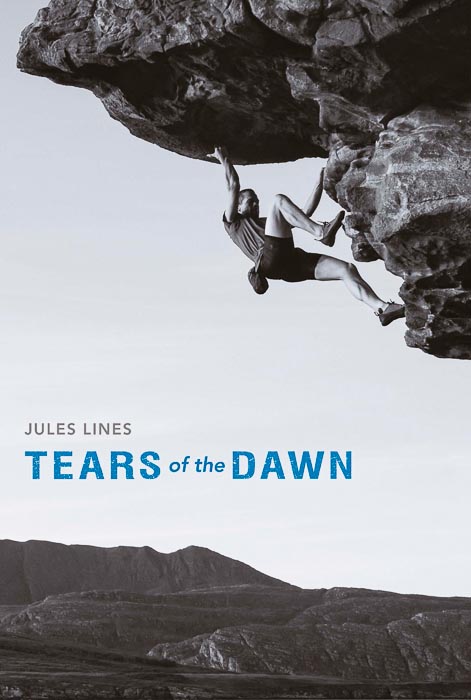 The award winning Tears of the Dawn by Jules Lines has recently been republished by the Scottish Mountaineering Trust. The cover shows author Jules Lines, widely regarded as Britain’s most accomplished free solo climber, making a rope free ascent of Burning Desire (E5 6b) at Ardmair. (Photo Cubby Images)

Tears of the Dawn was first published in 2013. It is an autobiographical account of Jules Lines’ climbing life, mainly as a solo climber. The book was originally self-published and became a hugely successful title winning the prestigious Boardman Tasker prize. Once it became out of print, second-hand copies were rumoured to sell for hundreds of pounds on ebay, so this new edition from the Scottish Mountaineering Trust is very welcome.

I try and make a point of reading Boardman Tasker winners – invariably they are well written and over the years they have captured many aspects of the climbing game. But I must admit that first time around I only made it halfway through Tears of the Dawn before I set it aside. It was not because it was a dull – far from it. It was too exciting and there was a limit to the number of heart-stopping solo epics that I could digest. I tend to enjoy the problem-solving side of climbing, and on a first reading Jules appeared to have a more impulsive approach that I found difficult to relate to.

But similar to watching a white-knuckle thriller at the cinema, you know that Jules is a survivor otherwise he could not have written the book. So second time around, I ran with the roller coaster ride of Jules’ climbing career, and this time really enjoyed it. Jules writes evocatively and has a wonderful ability to describe wild places – how they look, touch, smell and feel. For this aspect alone it is no wonder that Tears of the Dawn is a Boardman Tasker winner. I sense that being at one with the landscape is the real driver for Jules’ climbing. For sure, the solo ascents are gripping and cutting edge, but they provide the motivation for Jules to visit wonderful and diverse places, and by getting to know them so intimately he is able to make his solo ascents.

The more I read Tears of the Dawn, I realised that Jules’ ascents are not crazy carefree spontaneous affairs. There is a spiritual aspect required to achieve the zen-like state to make the sequence of moves, but similar to most noteworthy human endeavour, the climbs are carefully thought through, meticulously prepared and conceived – in fact, Jules very much adopts a problem-solving approach. There are several winter climbing escapades described in the book. Perhaps the most gripping is a solo ascent of an out of condition March Hare’s Gully on Beinn Bhan. More measured, but clearly hugely influential on Jules’ subsequent climbing career, was a schoolboy ascent with teacher John Hall of Emerald Gully on Beinn Dearg.

I am very glad I persevered with Tears of the Dawn second time around. It is a remarkable book by a remarkable climber.

The Scottish Mountaineering Trust is well known for its acclaimed educational and historical titles such as Hostile Habitats, The Cairngorms – 100 Years of Mountaineering, and Scottish Hill Names. Tears of the Dawn marks the introduction of a new series of climbing and mountaineering titles with broader scope – exciting times!

Simon Richardson is a passionate Scottish winter climber
View all posts by Simon Richardson →
This entry was posted in Book Reviews and tagged Jules Lines. Bookmark the permalink.