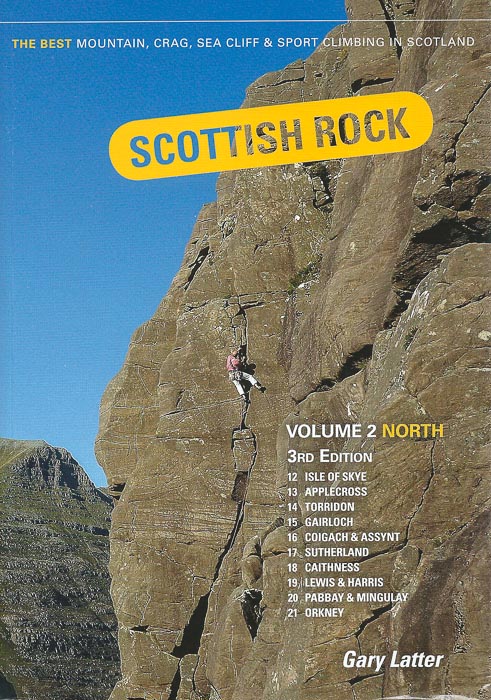 The third edition of Gary Latter’s popular two-volume guidebook to Scottish rock climbing has recently been published by Pesda Press. The cover photo shows the author climbing Crack of Ages (E2 5b) on Seana Mheallan in Torridon. (Photo Karen Latter)

Gary Latter first published Scottish Rock – Volume 1 South in 2008. This covered popular rock climbing venues from Arran through Arrochar, Glen Coe and Ben Nevis to the Cairngorms. A year later, Volume 2 North completed the series describing rock climbs from the Isle of Skye, the Northern Highlands and the Outer Hebrides and Orkney. Superb production with many colour topos and action photographs by Pesda Press, meant that the two volume series became very popular. The series was republished in 2014, and this new publication of Volume 2 North completes the third edition.

So what’s new? Several further venues have been included such as Super Crag near Lochinver, which Gary describes as “far and away one of the best sea cliffs on mainland Scotland…” There are many easier routes included for the popular Diabaig crags together with new additions on the Skye sea cliffs of Suidhe Biorach, Neist and Staffin Slip, which are becoming recognised as providing some of the finest crag climbing in Scotland. Also included are recent additions on Lewis, Pabbay and Mingulay together with many new topos. Overall there are 2500 routes described including 300 new descriptions and 50 new topos compared to the previous edition. Gary has devoted his life to Scottish rock climbing and his knowledge and enthusiasm shines through on every page.

It is fair to say that Scottish Rock has eroded sales of the SMC’s Scottish Rock Climbs, which has a similar scope providing selected rock climbing coverage across the country, but in a single volume rather than two. Unlike a commercial publisher however, the SMC has a remit to provide comprehensive coverage across the Scotland. To date it has achieved this through definitive guidebooks, but due to their more specialist nature they have lower sales than selected guidebooks. This delicate, and often precarious, commercial equation is balanced by greater sales from the SMC’s selected guidebooks.

Competition is a good thing though. The outstanding production of Gary’s books and recent SMC publications such as Outer Hebrides set a high bar that will undoubtedly lead to even better Scottish climbing guidebooks in the future. Commercial publisher or not, writing any guidebook is a labour of love, and the cover price only represents a small fraction the time and commitment that goes into writing and producing them. I take SMC guidebooks together with Gary’s volumes whenever I go rock climbing in Scotland, and I very much appreciate the different perspectives they provide. They cost less than the fuel required to travel from the Central Belt to the Northern Highlands and can salvage a trip if weather or conditions dictate a change in plan.

We are fortunate to be in a very healthy position in Scotland with several publishers producing quality work. Let’s keep it that way by purchasing their guidebooks.

Simon Richardson is a passionate Scottish winter climber
View all posts by Simon Richardson →
This entry was posted in Book Reviews and tagged Gary Latter. Bookmark the permalink.