Posted on February 20, 2020 by Simon Richardson 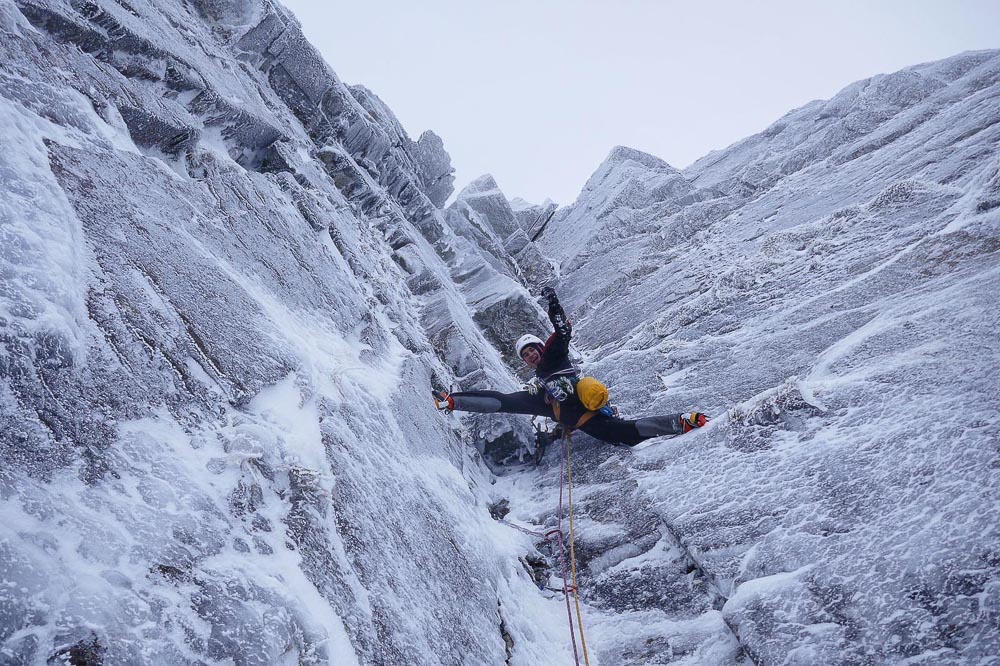 Tim Miller on the first ascent of Sapiens (VIII,7) on Lost Valley Buttress. This bold and technical route is based on the direct finish to Neanderthal, and is one of the highlights of the season so far. (Photo Jamie Skelton)

In the late 1980s Rab Anderson was the driving force behind a group of mainly Edinburgh based climbers that popularised mixed climbing on the Northern Corries and Glen Coe. Routes like Deep Throat and Hoarmaster in Coire an Lochain were climbed during this period, and in Glen Coe, Neanderthal on Lost Valley Buttress was one of the stand out routes. Rab was Scottish correspondent for Mountain magazine at the time and I can still remember the impact of his outstanding full-page photo of Grahame Nicol on the first ascent. Today, Neanderthal is one of the most prized winter routes in the Coe, and no push over at VII,7.

Neanderthal is based on the soaring corner-line in the centre of the buttress, but it cleverly steps out left to avoid the finish up the continuation corner. The direct finish had been noted as a potential objective for many years, and in 2011 Andy Nelson made couple of determined attempts but was repulsed by poorly protected technical climbing.

Tim Miller and Jamie Skelton decided to make the line a key objective for this winter season. They made two attempts with Dave Almond and Jack Morris, and were eventually successful on February 18. The full story of their ascent which involved deliberately using a third tool as a crucial runner is described on Tim’s blog. Not only did Tim and Jamie succeed on climbing the crucial corner, which involved a long run out with insecure crampon placements, they added two new independent pitches lower down. The result is Sapiens that comes with a heart stopping VIII,7 grade. (You don’t want to fall off these sort of routes).

Sapiens and Greg Boswell and Guy Robertson’s Local Hero on An Teallach are the outstanding ascents of the winter so far. With snow all across the Highlands and ice building everywhere, I have no doubt there will be more to come!