Posted on February 19, 2020 by Simon Richardson 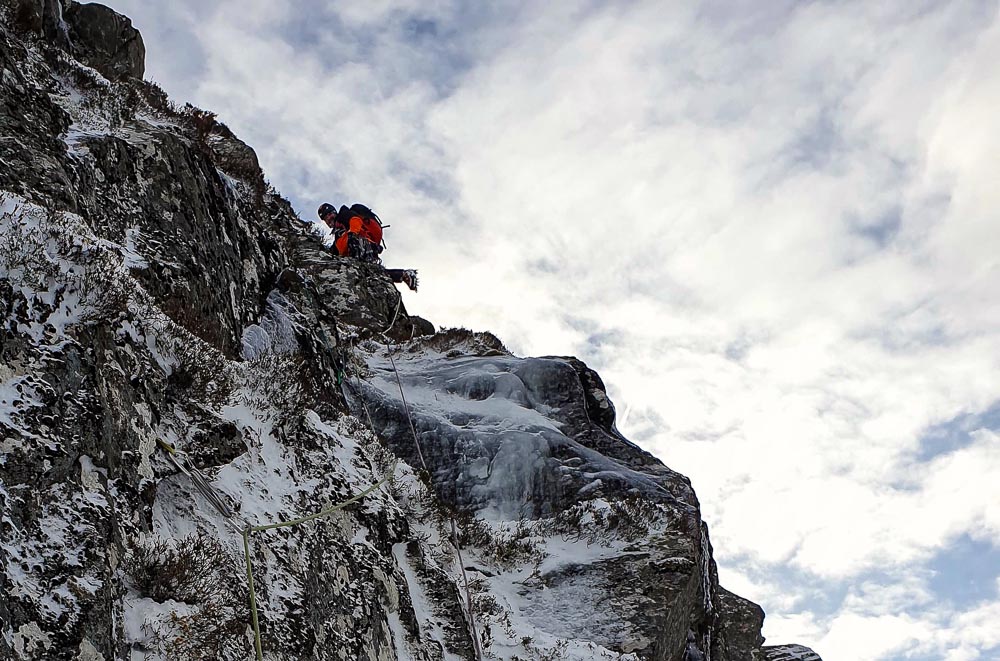 Alan Halewood on the first ascent of Hairy Maclarey (III) on the west side of Stob Coire Sgriodain. This is the first route to be climbed on the 200m-high Creag Mholach. (Photo Dave Anderson)

Alan Halewood and Dave Anderson had a good exploratory day on February 13 when they added the first ever route to Creag Mholach (NN 35168 74631) on the west side of Stob Coire Sgriodain above Loch Treig in the Central Highlands.

“The buttress lies directly above the West Highland line and catches my eye every time I take the train to Glasgow so it was nice to finally get a chance to get there,” Alan told me. “It’s also well seen from the Laggan Road. The base is quite low so it needs a good dump of snow and cold, which ironically means that the approach for vehicles to Fersit may not be possible (we had an extra 20 minutes walk each way owing to icy roads and a previous attempt a few years ago stalled at the A83).

A long heathery approach took us the base of the crag, which is quite like something from the Arrochar hills composed of numerous short steep schist craglets with heather ramps, ledges and bays. There was a surprising amount of ice (thin) on schist slabs above us on the approach and one steep icefall on the far left side of the buttress. The rock had been stripped by the sun so we kept to vegetated snowy ramp lines and icy steps and took a line starting just right of the lowest rocks.

There was Grade III climbing on the first and third pitches. The second was easier but poorly protected. The climbing was only ‘ok’ in quality but the steep drop to an inky black Loch Treig added to the situations.

I suggest the name Hairy Maclarey (a scruffy terrier who is a character from a series children’s books) as the heavy heather tufts on the route had a habit of rebounding axe swings and one translation of ‘Molach’ is ‘hairy’.”