Western Highlands Most Sought After Route 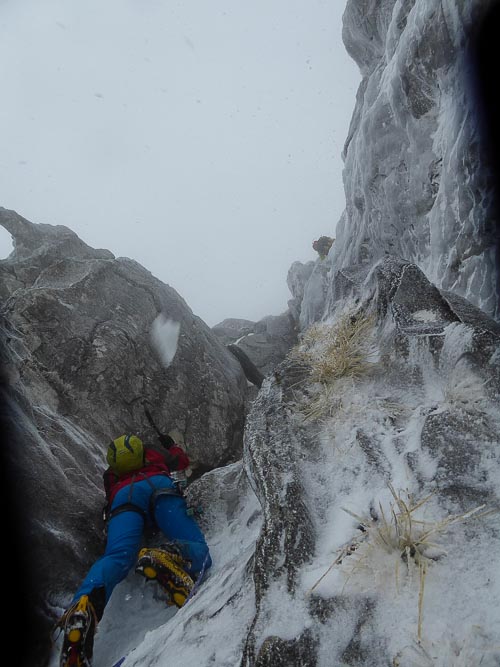 Robin Clothier leading Tir na Og (V,5) in Knoydart with Doug Hawthorn just visible on the far skyline. Although the route is a classic Scottish icy winter outing it has not been tamed by modern equipment and remains a serious proposition. “The best belay all day was dodgy hex, half a warthog and my axes!” (Photo Richard Bentley)

I received an intriguing email from Richard Bentley on March 5:

“I got the call from Robin at 9pm last night. (He wouldn’t say the route.) Meet at Spean Bridge at 7am. A drive, a boat, a fast stomp in – Uisdean, Doug, Robin and me. Twelve hours later, back at Spean Bridge. Fab ice, icy mixed, big classic route on a big mountain. (You have to guess!) What a team!”

The boat was the giveaway, of course. Richard had made an early repeat of Tir na Og (V,5) on Ladhar Bheinn in the company of Robin Clothier, Uisdean and Doug Hawthorn. The 350m-long Tir na Og was first climbed by Con Higgins and A.Foster in February 1978 and was the first Grade V route in the Western Highlands. Despite being a highly sought after objective you can still count the number of ascents on the fingers of one hand. Twelve hours is a remarkably fast time for the round trip. Most climbers visiting Knoydart do not use a boat and take a full weekend to walk into Barrisdale, climb a route, and walk out again.

Robin summed it up a few days afterwards. “Routes should not be all about standard tick lists. This climb should be on everyone’s CV!”