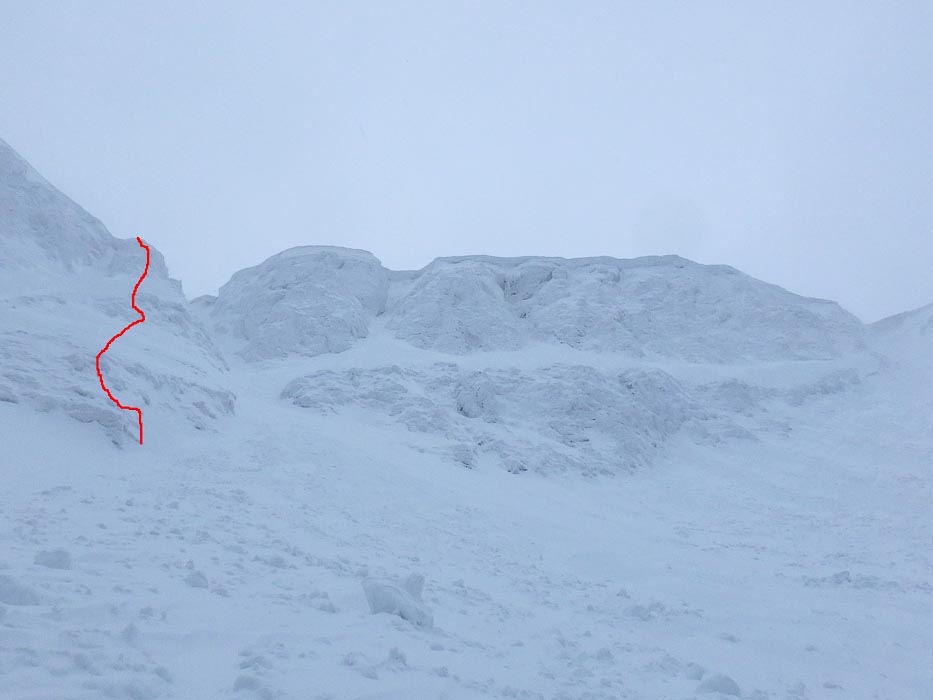 Martin (Wilf) Holland visited Coire na Saobhaidhe on Beinn Chuirn near Tyndrum on March 6. “A brief break in the clouds allowed me to see the crag and there were surprisingly large cornices, which had survived the thaw of two weeks ago,” Wilf told me.

“The cornices were above all the existing routes put up by Andy Nisbet and Dave McGimpsey in 2008. I therefore, climbed a line just left of the main gully, which finished up a barrel-shaped buttress, this provided the crux and was cornice-free. I started from the base of the main gully, which means the 115m route length is longer than the previous routes, but the lower section was easy with just the odd step. The upper buttress was the meat of the route and meant that Lucky Strike probably just creeps in to Grade III.“

A week earlier on February 25, Robin Clothier, Ian Dempster and Stuart McFarlane added a new route to Ben Lomond. “We wanted to avoid the crowds,” Stuart explained. “The venue had to be north facing and hold snow well, since the weather had been sunny and clear. Ben Lomond seemed a good choice, especially since the Met Office forecast morning fog for that area, surely that would hoar the rocks?

The plan worked well with firm snow, it was bitterly cold and mist engulfed the summit. I had always fancied Lomond Corner so set off up that in one long pitch, the other two moving up so I could reach belay.

We then descended to have a look at Rowardennan Rib, which climbs the right side of a square rib. Between that and Endrick Corner lay a turfy line leading up into a recess on the left of rib, before an obvious groove ran parallel with Endrick Corner and through a steepening above. This provided an excellent IV,5 turfy mixed route.

Earlier during the walk to the summit, I listened to Robin and Dr Ian, discussing the problems facing the NHS, so calling our new addition Opinionator seemed rather fitting!”