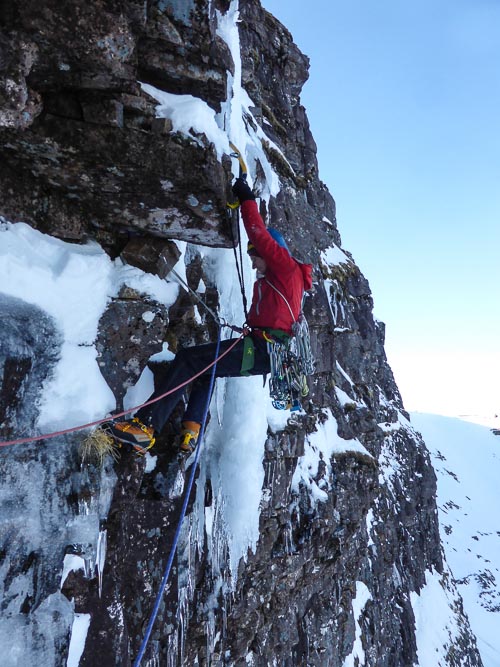 Murdoch Jamieson pulling through the crux bulge of the Direct Finish (VII,7) to Der Riesenwand. “It was possibly steeper and more difficult than the picture shows, especially establishing oneself onto the ice,” Nick Bullock commented afterwards. (Photo Nick Bullock)

Murdoch Jamieson and Nick Bullock climbed a direct finish to Der Riesenwand (VII,6) on February 25. Just before the ‘memorable swing around a bulge’ on the upper left-trending ledge, they were attracted to steep ice on the right, so Murdoch made some mixed moves right to gain the hanging ice. “We were not following the natural line, but it was nice, exciting and very airy climbing,” Murdoch explained afterwards. After this pitch there were two more of about Grade III/IV to the top.

There was some discussion as to whether this finish had been climbed before, but the consensus is that it was probably unclimbed.

“I can see how this could have been done in whatever condition or with a bigger icicle and how it would be more straightforward then, but still worth a guidebook mention maybe as the overall grade does increase with this finish,” Nick concluded.

So for those looking for a bit more adventure on an ascent of the Northern Highlands ultra-classic of Der Riesenwand, then the three-pitch Direct Finish (VII,7) could be just the ticket!