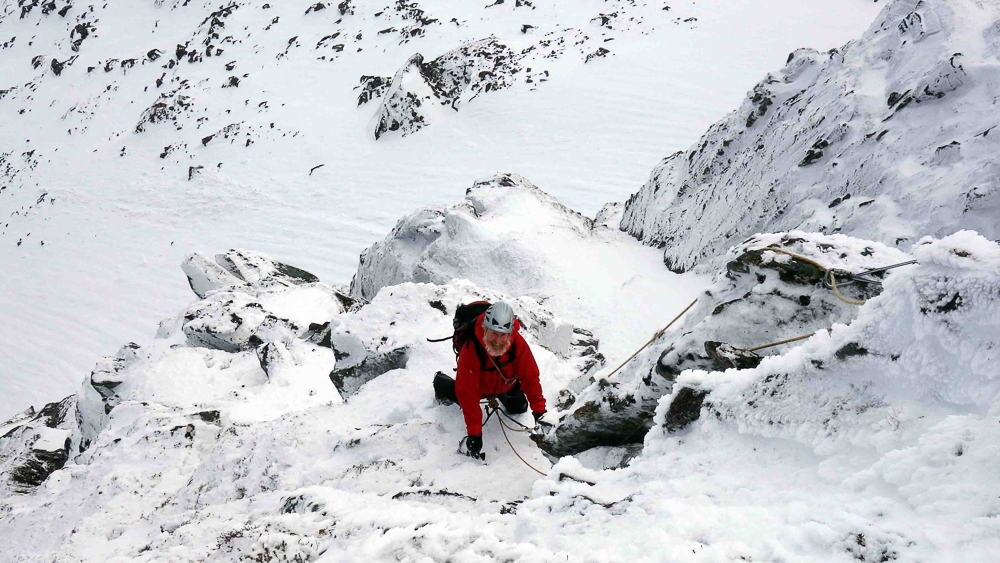 Andy Nisbet on the first ascent of Attaboy (V,6) on Beinn Fhada in Kintail. This excellent- sounding route ‘was rather good, as intimidating but ultimately helpful lines are’. (Photo Dave McGimpsey)

“Beinn Fhada is almost on the west coast behind the Five Sisters of Kintail,” Andy Nisbt writes. “It’s sheltered from most snowy wind directions so is often my choice if there’s too much snow elsewhere. No doubt it rains a lot on a westerly but I hope not to be there. It has two climbing corries, and not surprisingly, the further away one, Coire an Sgairne, doesn’t seem to get many climbing visitors. Except me and friends, of course.

Recent conditions of cold easterlies and lots of snow have attracted me there. The lower section of the corrie doesn’t freeze very often but that isn’t a problem this year. Because it lies on the side of the ridge between the two corries, there isn’t enough drainage for regular ice but the schist holds plenty of turf. Ice is OK, but it’s always a gamble whether unclimbed ice lines are complete, whereas turf is guaranteed if it’s cold enough.

So on February 26, Dave McGimpsey and I headed there to try a new line I’d spotted on my crag shots. It was a prominent deep groove in the highest section of the cliff, and while I was pessimistic about climbing it direct, it looked like you might be able to bypass its steep crux on the left. In great conditions of hard snow, Dave and I soloed up to below the groove. Dave fancied giving it a go but the ice was thin and my pessimistic self could see a crucial section, which might break off and require a very awkward retreat. The left side also seemed steeper and smoother than appeared in the photo, so a line up to the right seemed the only option.

Once out there, a small steep groove above seemed to hold enough turf. The moment I set off, the mood changed to optimism. The turf was good and cracks appeared at regular intervals. Schist is all or nothing in this respect, and this groove had it all. After passing the difficulties, the main groove was easily regained and followed to the top. It was easier than expected at IV,5 and at least provisionally it’s called Zeitgeist, only because it sounds a good name but without having any relevance to the route.

While we were looking in all directions for a way to avoid the steep groove, I couldn’t help noticing a potential line low down on the left, climbable but way too far left for us that day. So when I got home, I looked at my crag shots to see where it went. It led into steep ground but with two parallel grooves and a crest between them. The crest had snow patches so wasn’t just a smooth arête, plus the arêtes here have more features than the grooves.

So Dave and I headed back on March 7 after heavy snow the afternoon before, and again the hope that it had snowed less near the coast. I think this was true but it didn’t seem so when even the approach path was deep, although fortunately there were walkers ahead of us. As we gained the corrie, the snow depth seemed to lessen, probably blown into the valley, but the crag was pure white and the line intimidating. Dave spotted a different groove filled with thick ice and headed up to investigate. Dave likes ice but I hadn’t taken any ice screws and it looked a bit steep. The odd thing is that it really focussed me on giving the other line a go.

So we soloed up the easy start, and then a not so easy break out left until we both agreed not to do any more soloing. I was contemplating a low line out left but Dave had spotted a higher line. He said it looked fine, so a decision was made. We spent a while looking for a belay, finally settling for a peg driven into turf, but it took so much hammering that we decided it must have gone into rock. The fine looking line didn’t look easy fine to me, but a score in the rock 10m up turned out to be a perfect crack which I duly laced up in case there wasn’t much more (there wasn’t). The trouble with small ramps is that you only get your axes or your feet on them, so they aren’t in balance like you’d hoped. After trying the foot option and finding nothing for the axes, I went for the axes option and swung my feet on to steep ground below. But the axe placements seemed good, so a couple of moves left me with a fierce pull back on to the ramp. I hammered in my axe just to make sure it couldn’t come out, ignoring as usual that it might get stuck, and pulled up on to a ledge (it did come out, just). A grovel over a chockstone gained a bigger ledge and easier ground. We were climbing on a skinny 60m rope doubled, so pitches were short.

The potential grooves seemed to end in unpleasant bulges so Dave carried on to the crest. I asked him if it looked OK but he was non-committal, however the speed he climbed suggested that it was. I did shout up that the photo suggested a steep bit higher up but probably on my pitch and he answered that he was at it. A helpful flake-crack didn’t take him very long, but a couple of rocks came down as he warned me that it was loose. It didn’t seem too bad as a second but it doesn’t with a rope above you.

Next pitch was mine, and looked steep. I tried looking left and right but straight up didn’t look any worse and was clearly the purest line. There was a 10ft flake perched on the crest, not looking attached to anything, but I decided that if it stayed there in the summer, then it should be solid enough when frozen. While I was contemplating, Dave actually moved his belay so he wasn’t underneath it, but didn’t tell me till afterwards. With a sling runner on a rounded flake, I reached round and found what appeared to be a good placement. After a ‘should I or shouldn’t I’ moment, I came back down and put in a couple more runners. This time it was a definite should and the steep moves were over quickly (as steep moves need to be). Then it quickly got easier.

We turned the rope into a single and Dave ran out a 60m pitch to the top. The wind was getting up but the top was nearly calm and the views into the other corrie were fantastic. Last time we descended into it as Dave wanted to solo Left-Hand Gully, which I admit looked great but I didn’t have the energy. For once it was in its Grade II nick and he loved it. I used to be graded II/III, but I’d never seen it in Grade II nick so it went into Northern Highlands South as a III. But this time we descended the ridge and back into our corrie to rejoin our approach steps, an easier choice.

The steep ice groove is still unclimbed, but escapable after the groove and again higher up, so I think we chose the better line. Actually it was rather good, as intimidating but ultimately helpful lines are. We called it Attaboy (V,6), as Fhada is pronounced Atta.”