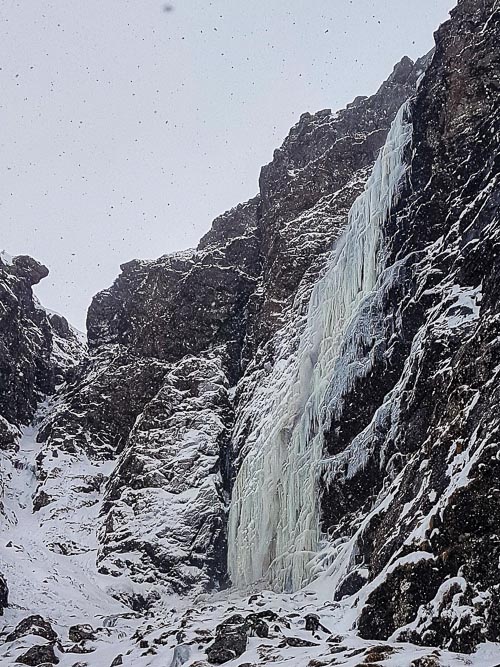 The cold weather brought the frozen waterfall of Easan Feidh in the Far North-West into rare climbable condition. Steve Perry and Sophie Grace Chappell battled through a long approach in deep snow and endured spray from the unfrozen central part of the fall to make the coveted first ascent last Monday. (Photo Steve Perry)

Steve Perry and Sophie Grace Chappell showed remarkable vision, determination and persistence when they made the first ascent of Easan Feidh (VI,6) on March 5. This spectacular 90m-high waterfall, which lies on Creag na h-lolaire to the south of Ben Klibreck, had been eyed up by connoisseurs of the area as an excellent winter objective for a number of years.

“Mike Geldard, who used to run The Crask Inn, is a good friend of mine and first showed it me on the map a few years ago, so it’s been on my radar for quite some time,” Steve told me. “Mike has seen it formed various times over the years as his sheep graze in that area and he can get all the way there on his quad (7km from Crask). After seeing lots of low level ice posted on Facebook I called him and he said it will be there because the burn is frozen at The Crask. Now Mike is one of the most reserved people I know, so when his parting words were ‘come up, it’s spectacular!’ we changed our plans.”

Sophie Grace recounts the story of their ascent: “You come over the bealach from Crask on the old stalker’s path. You count Mike and Kai’s sheep for them as you go. (Their herd is 67 animals, we counted 78.) You wish it was colder and it was snowing properly not sleeting and you had ice underfoot not that sloppy white custard that recently-melted ice makes. Yet Mike did say “If the burn at Crask is frozen then it’s in.” And the reason we’re here now is because Mike told Steve on the phone that the burn at Crask is frozen. Local knowledge – it’s better than any forecast…

As you trudge you start looking at the gullies across the glen on your right. Where is it? Where is our Cunning Plan? Heck, I hope it’s not meant to be there, or there, because that looks rubbish and that’s not in at all… you go on a little further down the hill towards Loch a’Choire and round a bit of a corner and… OMG.

There’s a slightly gnarly gulch across the glen, with a good potential sport-climbing-venue crag overhanging it on the left and all sorts of steep tussocky nonsense on the right, and above the gulch it breaks out into a big and spectacular amphitheatre with an overhanging rock-nose on the left, and above the amphitheatre on the right… Oh. My. Sweet. Lord. A double-band waterfall straight up a rock-face, 20m wide at the bottom and 80m high before the angle eases, well frozen to right and left but running down the middle, all chandeliers and pillars and stalactites, yellow and horned and crested, and massive. Simply massive. Massive and, even from a kilometre away, quite obviously really really steep: 80 degrees then 90 degrees then 60 degrees. People have been climbing in Scotland for 150 years, for heaven’s sake. 150 years, and no one’s done this before?

And you think, “So we thought from the gradients shown on the map, which worked out at one in one i.e. 45 degrees, that this might be a bit like Steall only easier. Might be a romp-up grade III playground. Nothing of the kind. This is a stunning, stunning route. But it’s also clearly a bit of a mission. More like Bridalveil than Steall. And with all this thawing going on, is it even sound?”

And you listen to your partner going “My God, that looks amazing. We’ve got to. We’ve simply got to. After that walk-in? When this is hardly ever there? There’s no frigging way we’re just taking the gear for a walk today.”

And you think, “Oh, here we go. Here comes another epic.”

So you cross the glen and scramble up the gulch in the deer-tracks, scattering the hinds out of their sheltered cove, trying to keep your boots out of the six-foot-deep break-throughs into the burn, and you gear up in the amphitheatre at the foot of the route. There’s so much spray it’s like getting dressed in a cold shower. And part of you hopes that a car-sized lump will come down before you start (missing you) and act as an official declaration that the route’s not in. Or that Steve’s test screw will go straight in and straight out again like the ice wall is a giant slush puppy. But no. Under the top inch or so it’s really good ice.

So no excuses left. Up he goes and I’m standing there in the spray, listening to the thud and crunch of chunks of ice falling off the waterfall, watching the ice-spicules piling up like hourglass sand as the water-course hollows out the ice on either side of it, watching the ropes siphoning water off the ice like a running tap, trying not to move so I don’t get that clammy-clothes feeling all down my legs and back, trying to belay him from somewhere slightly less wet than anywhere else (there’s no such place).

The good news is it’s snowing properly now, not sleeting. So it’s getting colder: excellent, though there’s surely no chance it will stop the spray. I watch the little snow-sluffs coming off the heathery slope on the other side of the amphitheatre. I search my memory, wondering if, from the stalker’s path, I saw a big avalanche-apron at the top of our route. Don’t think so. Certainly hope not. Bugger all we can do about it now if there is. (But no, there isn’t.)

He has a long pause after about 8m (afterwards he tells me he was seriously thinking about backing off). But up he goes, up steps and grooves, steep but manageable, to a good ledge on the right after 30m, gets safe, lies down and has a good swear at his hot aches.

And now it’s me. I wring out my gloves (“100% waterproof” it says on them—ho ho ho), clip my tools into my spinner-leash, check my crampons and my harness, tighten my boot-laces, then pretty much race up it because I’m so desperate to get out of the wet and warm myself up again. Whack punch whack punch. I start with my heart in my mouth but in fact the ice is brilliant. 80 degrees is so much easier than 90, you can use your feet so much more, provided you can see them through the mist on your glasses. And at the ledge I get the hot aches too. I wail and swear and howl, and tie myself in, take my gloves off and on, and clap and flex my hands to make the pain worse but briefer, while Steve puts my glasses away for me and flakes the ropes. He’s got two pegs in the rock and I think “Grand, now I know we can ab off if the second pitch is a horror-show.” (Good job we didn’t—when I clean the belay the bottom peg comes out with just six hammer blows, and when I hit the top peg, the rock around it disintegrates into flakes of choss first blow. So the bottom peg is very dubious, and the top peg wouldn’t have held a sneeze.)

Pitch 2. Steve goes left round an ice-pillar. First move he puts a screw in the pillar to back up the belay (just as well: see above) then he’s in a vertical sentry-box in the ice. He gets two parallel screws in and has a think. Then he just goes for it, straight upwards as quick as he can before his feet come off. He tells me afterwards he climbed it pretty much arms-only. He slithers when he gets on it but he controls it. Then I have a very good view of his anti-ball plates for about half an hour: he’s straight above me and moving very carefully indeed. It’s seriously steep, it’s like it overhangs the belay, and he’s got a screw in at the top of the sentry-box (hurray) and he’s chopping away a huge ice-umbrella so he can move up and left. Then he disappears over the brow—to my delight, because it means he’s on less steep ground. Another twenty minutes and he whoops, which is better still. Can’t hear what he’s saying but the tone is jubilant. I whoop back.

Then up I go and oh my goodness it’s steep. Where Steve slithered, I pop off, and swear my head off. I thought I was going to do this clean but the vertical sentry-box is beyond me. My crampons aren’t sharp enough, the ice here is too flaky and cruddy, and I’m trying to do it too fast. Snakes alive, Steve, this is completely nails, how on earth did you get up this? I flail a bit. I stop and give myself a sweary talking to. Calm the F down. Take your effing time. Use your effing feet properly and get them kicked in better underneath the cruddy top layer. Go A-shape. And stop effing over-gripping.

Once I’m above the sentry-box it’s okay. One way or another I get to the belay (which is excellent this time—a nut and a slinged boulder that would hold the Queen Mary). I carry on up the heather to the top and start coiling the ropes.

And now I’m on the plateau, and it’s there. We’ve done it. It’s in the bag. High fives and back over the sleety moor in the dusk for tea and medals with Kai and Mike, where I hog Kai’s scones and the wood-burning stove, and try and get all of their collies on my lap simultaneously, to warm me up.

Overnight in Steve’s spare room near Inverness, there’s a glow and a buzz: that after-route feeling, so hard to beat. It’s hard to sleep, but we both dream of the route. And the next morning I look at Steve’s route photo and I think: Oh my sainted aunt. We climbed that. We—climbed—that. Route of the season!”