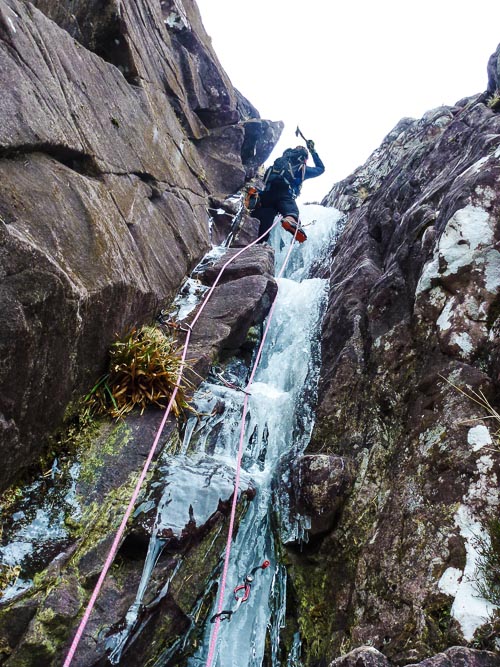 Dave McGimpsey climbing the crux of Damh Goulotte on Beinn Damh on Torridon. “It was steeper, harder and better than we expected – V,6 but not easy at that.” (Photo Andy Nisbet)

“Beinn Damh remains an accessible venue for the old climber with a gammy knee,” Andy Nisbet writes. “And it has the added bonus that it’s escaped snowmageddon, leaving only ice and neve.

The good conditions have tempted Dave McGimpsey out of his sabbatical, so we went on March 2 to try the right branch of an older route, Fawn Gully. It would be the better line for Fawn Gully, but looked too hard to solo when that route was first done. There was loads of ice in December, so we were spoilt for choice, but we had gone with mixed equipment and chose a buttress line. So a fair bet that there would be plenty of ice with the ground frozen to sea level.

And so it proved. With the extra ice, we climbed Fawn Gully more direct to reach the branch, which leaves the main gully just below the end of its difficulties. The branch is steeper than the main gully but the ice turned out to be more continuous rather than actually steeper, so the rope and rack stayed in the rucksacks over several small ice pitches to finish up a neve field. Grade III seemed fair for several ice pitches even if none were long.

On the approach to Fawn Gully, my eyes and camera were attracted to a narrow gully which was the original aim of Sandy Allan and I on November 30 (see the post of 17 Jan), except there was no ice in November. The photos inspired Dave to agree to a visit two days later (March 4), supposedly a guaranteed route after a failure the day before.

It was a good-looking line of continuous ice over several steps, and our eyes ignored a couple of icicle sections, which should have suggested it was steeper than we thought. Beinn Damh gullies often don’t have much rock gear so we had taken plenty of ice screws, although with consecutive ice screw belays, barely enough. Always trying to reduce weight, we used a skinny 60m rope doubled, so 30m pitches.

Dave led the first pitch, supposedly easier but it wasn’t that easy, to a convenient patch of horizontal ice just as the rope ran out. The next pitch was clearly the crux and looked quite fierce to me, although Dave took the second’s role of great optimism. I had been hoping you could chimney it, but clearly you couldn’t.

I didn’t get very far, failed to get a decent runner because the ice was too thin, or a peg because I hadn’t taken any angles, and came down to offer the lead to Dave. I wasn’t sure he’d accept, since he hasn’t climbed anything this hard for several years, but he decided to give it a go. Winter climbers need to be positive so I should have realised that ‘give it a go’ was a very definite statement.

Getting to my high point was easy, because it wasn’t very high, and then he set about getting a better runner. I had scraped a corner and found nothing, but a more determined Dave realised that an axe pick might find nothing while a knifeblade could still go in. Which it did, and a good placement above it allowed a longer reach up the ice to something a bit thicker. Enforced use of the knees allowed him to pull into a little niche (I assumed when watching that a second could climb it more elegantly, but I did it exactly the same way). Another move gained a good rest below a half formed umbrella.

Passing this looked hard from below but the gully decided to accept Dave as a friend and allowed him to bridge much more amenably into an easier upper gully. Now the gully opened out into a snowy bay and only a short chimney pitch to escape on to the upper slopes. So we succeeded on the Damh Goulotte (V,6) and hope we don’t get a thaw any time soon.”