Posted on November 10, 2011 by Simon Richardson 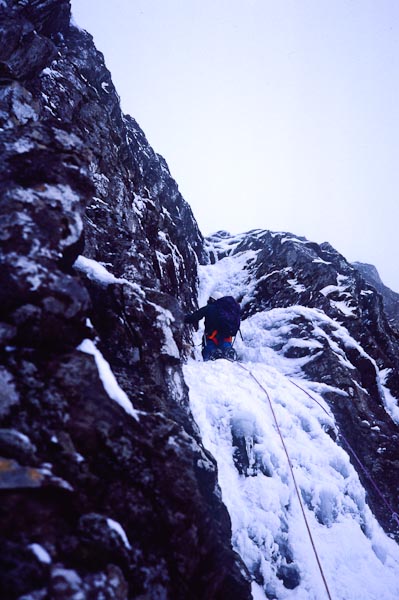 Roger Everett climbing the crucial central ice pitch on an early repeat of Tir na Og (V,5) on Ladhar Bheinn in February 1986. This highly coveted 350m-long route, was first climbed by Higgins and Foster in February 1978, and has only seen a handful of ascents. The evocative Gaelic name means ‘Land of Eternal Youth’. (Archive Photo Simon Richardson)

There is an interesting thread running on UKC at the moment compiling a list of rarely in condition Scottish winter classics. The concept is a paradox of course – a route cannot really be deemed a classic until it has had a body of ascents confirming its quality and reputation – but the meaning of the thread title is clear. What are the most coveted routes in Scotland that require very special conditions to make them climbable?

Quite understandably, the list has focused on ice routes that take long periods of cold weather to bring them onto condition. Jamie Bankhead went one step further however, and proposed Tir na Og on Ladhar Bheinn in Knoydart. There is no question that this is the most sought after winter route in the Western Highlands, and it has only seen a very small handful of repeats. Jamie posted that climbing Tir na Og “would be more meaningful to me than the Eigerwand,” which is an apt comparison, because Spider Buttress, the home of Tir na Og, is rather Eiger-like in appearance, complete with its own Spider-shaped snowfield high on the face.

I was fortunate enough to climb Tir na Og about 25 years ago, so I reflected on the conditions required to bring the route into condition. The route needs a heavy snowfall and a sustained period of cold lasting several weeks to freeze the turf and allow the central ice pitch to form. This is quite an unusual blend of weather conditions, especially for a route that lies so close the sea, but it made me think about other great Scottish cliffs that require an even more precise combination of weather events to bring them into condition.

My first thought was Magic Bow Wall on Sgurr an Fhidhleir. This 400m-high cliff faces Southeast, lies on a peninsular surrounded by sea on three sides and starts at an elevation of only 300m. Being so close the Western seaboard it needs an exceptionally sustained freeze to bring it into condition, but even so, the face has been climbed three times in the last twelve years (albeit by three different routes), and the neighbouring Fhidhleir’s Nose normally comes into condition at least once every season.

So snowfall and cold temperatures are important, but some routes require an even more unique blend of weather conditions that have to take place in precisely the correct sequence. Minus One Buttress on the Ben and Central Gully Wall on Dubh Loch fall into this category. They need a snowfall carried on a particular wind direction, followed by light winds to keep the white stuff in place in place coupled with a series of very gentle temperature fluctuations to bind it to the cliff. As a result, Minus One Buttress has only been ascended five times in winter (by three separate routes), and the front face of Central Gully Wall has only seen six ascents (on four separate days) in a period spanning over thirty years.

So my votes for the most elusive Scottish winter ‘classics’ go to the eponymous Minus One Buttress (VII,6) on Ben Nevis and Mousetrap (VII,7) on Creag an Dubh Loch. Both routes have seen three ascents apiece.

Simon Richardson is a passionate Scottish winter climber
View all posts by Simon Richardson →
This entry was posted in Commentary, Winter Conditions and tagged Jamie Bankhead, Knoydart. Bookmark the permalink.