Posted on November 17, 2011 by Simon Richardson 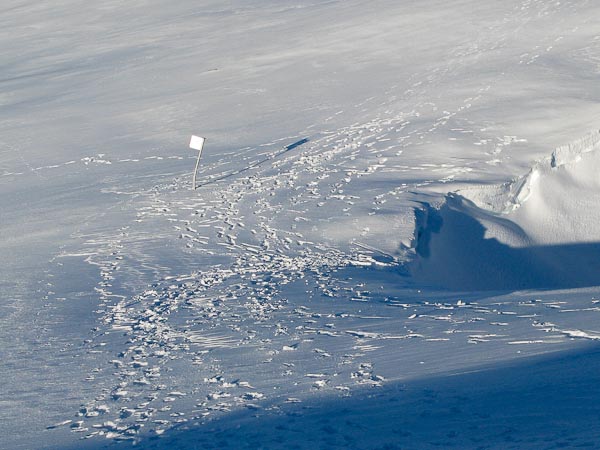 The aluminium marker post at the head of Number Four Gully was installed in 1954 by Dr Donald Duff, a keen climber and surgeon working at Belford Hospital in Fort William. Ever since, it has been a welcome sight for climbers searching for the top of Number Four Gully in poor visibility. The post was originally straight, but has been bent over the years by parties using it as an abseil anchor. (Archive Photo Simon Richardson)

For some inexplicable reason, the marker post at the head of Number Four Gully on Ben Nevis was removed last week and flung down the gully. A few days later on November 14, in a very public-spirited act, it was recovered and replaced by Alan Halewood. The John Muir Trust (who own the south side of Ben Nevis) are now inviting comments from the general public on whether the post should be retained – see http://www.jmt.org/ben-nevis-summit-consultation.asp

If you have strong views on this, I suggest you take part in the consultation. This is the content of the email I have just sent to the JMT:

“As author of the SMC climbing guidebook to Ben Nevis, I am writing to you about the Number Four Gully marker post on Ben Nevis.

Whilst I am aligned with the overall JMT objective of removing man made objects from Scottish mountains, the Number Four Gully marker post is a special case. It has been in place for nearly 60 years and has become a key navigational aid on the mountain. I strongly oppose to its removal for the following reasons:

1. The Allt a’Mhuilinn is the most common approach to the north face of the Ben, and Number Four Gully is the most used descent on this side of the mountain. This is because (with the marker post in place) it can be 100% identified in a whiteout, and the gully itself is very safe in the majority of conditions. The cornice is rarely impassable and the gully rarely avalanches.

2. The general area at the top of Number Four Gully can be a confusing place in poor visibility, even to the most experienced of Scottish mountaineers.

3. Removing the marker post will make the Tourist path to the Halfway Lochain the default descent in conditions of poor visibility. This will lead to considerable erosion from the majority who will cut back to the Allt a’Mhuilinn above the dam to return to the North Face Car Park.

4. The current winter guidebooks to Ben Nevis (Ben Nevis – SMC 2002, Scottish Winter Climbs – SMC 2008, Ben Nevis and Glen Coe – Cicerone 2010) all recommend Number Four Gully as the surest descent of the north side of Ben Nevis. All these books will remain in print for a number of years and will therefore pose a considerable threat to those unaware of the marker post removal. Searching for a marker post that is not there is an extremely dangerous situation. I suggest that the SMC and Cicerone are key stakeholders in this decision and should be fully involved in your deliberations.

6. If it is decided to remove the marker post, I suggest that an 18-month warning is given before its removal (i.e. at least one winter season). This will allow the vital information that the post is to be removed, to be communicated more effectively than if it happens a few months before the winter season starts. Warning signposts in car parks etc. will help, but many climbers start in the dark when signposts are not visible and there is no guarantee that they are read.

I support removal of the Abseil Posts in Coire Leis. Climbing skills and equipment have improved considerably since they were installed and they are very rarely used for abseiling. A distinctive cairn to mark the descent into Coire Leis is a good idea.