Posted on November 29, 2011 by Simon Richardson 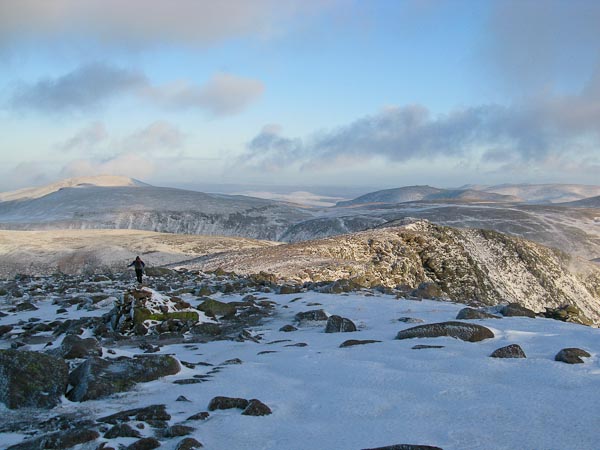 Roger Everett walking along the wind-swept Braeriach plateau above Coire Bhrochain on Sunday November 27. The strong north-westerly winds had scoured west facing aspects (i.e. the crag in sunlight on the right), whilst the more sheltered east side of the coire was white with new snow. (Photo Simon Richardson)

The unseasonably warm November temperatures came to an abrupt end on Friday November 25 with snow down to low levels across the Highlands accompanied by biting north-westerly gales. Dorsal Arête (II) on Stob Coire nan Lochan in Glen Coe saw a quick solo ascent before warm winds swept in that night stripping most of the snow away.

The freezing level on Saturday was well above the tops, but with more snow and cold temperatures forecast for Sunday, Roger Everett and I decided to pay a visit to Braeriach. Fortunately the predicted 110mph winds did not fully materialise, but even so, it was a long and gruelling approach through horizontal rain that eventually merged into a blizzard as we gained height. On the crag, the horizontal turf was frozen just enough to be weight bearing, which allowed us to climb an easy buttress before we were blown back across the plateau as the weather cleared.

Temperatures are continuing to fluctuate this week with a generally snowier, and colder outlook for the weekend. Winter climbing is definitely on the cards, but it will need careful route choice to avoid unfrozen turf insulated by new snow.