The Cuillin Ridge – A Winter’s Traverse 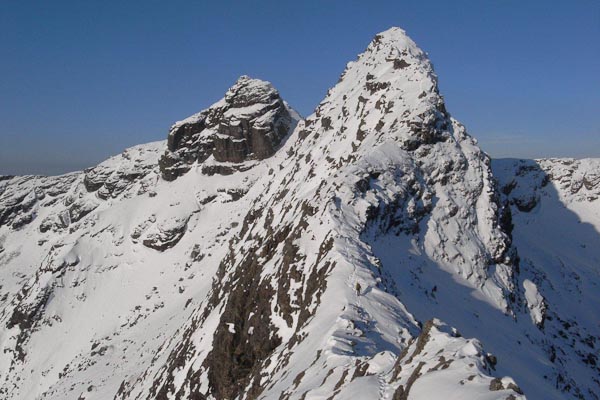 John Higham approaching Am Basteir on the first day of a two-day traverse of the Cuillin Ridge in March 2010. Sgurr a’Fionn Choire is the rocky peak on the left. (Photo Iain Young)

You may well have been climbing on the Ben – the Minus Face was superbly iced at the time – but another venue that was in prime winter condition was The Cuillin on Skye. Iain Young has recently compiled a fascinating video of a two-day traverse of the Cuillin Ridge he made with John Higham on 10-11th March 2010. Not only does this provide an insight into what it takes to complete one of the country’s most sought after mountaineering objectives, it also captures the full Scottish winter climbing experience – waking up in the car at 3am in the morning, incomparable sunrise views, tricky mixed climbing, persevering in poor visibility and a spindrift-filled bivouac. So, for some inspiration as the new winter season fast approaches, take a look at Iain’s words below and click on the link to watch the video.

“The traverse itself wasn’t flawless – for example we missed out the Inaccessible Pinnacle as the weather was closing in fast and we were fast running out of time – but as a mountain experience it was close to perfect. For me at least, it was the end of a quest that had started more than 30 years ago. In that time, half of which was spent living overseas, I kept searching for that combination of fitness, free time from work and family, like-minded partner, weather and conditions, which is almost unattainable. When I was a student, this was compounded by the lack of a car.

Previous attempts are almost as memorable as the eventual execution – dossing on the tarmac in darkness and drizzle in the Kyle car park waiting for a ferry, terrified we’d be squashed by a parking lorry; walking towards an Andean Cuillin, glimpsed between the clouds as an approaching warm front started to strip the ridge before our eyes; driving north in a blizzard that turned to torrential rain on Skye and then sliding the car off the road above Tyndrum in another snowstorm on the way home; reaching a plastered Ridge in perfect weather but unable to make any significant progress due to conditions of deep powder over bare rock…

Eventually, sitting at work in Aberdeen one Monday in March 2010, with the weather fast improving and having been cold for days, I emailed John who I think had just spent the weekend climbing on Meagaidh. After some ‘will we/won’t we’ discussions, we cancelled everything for the next two days, I nipped off home at four to get gear, drove off over the Lecht and so to Sligachan. Taking my car at Glen Brittle beach we grabbed a few hours sleep in the back of John’s car back at Sligachan, before the all too familiar, all too early, alarm.

The first day was simply sublime, the second was very, very Scottish. Much of the Ridge was new to us, and while that added to the experience, it for sure also added to the time. The continuity of the seriousness (the snow was very, very firm underfoot) was both surprising and impressive. The Ridge in winter is truly an Alpine undertaking, yet set in the middle of the Sea of the Hebrides, and while there is much in the mountains of the world that is harder, I’m not sure anything could be better.”

1 Response to The Cuillin Ridge – A Winter’s Traverse