Posted on January 6, 2018 by Simon Richardson 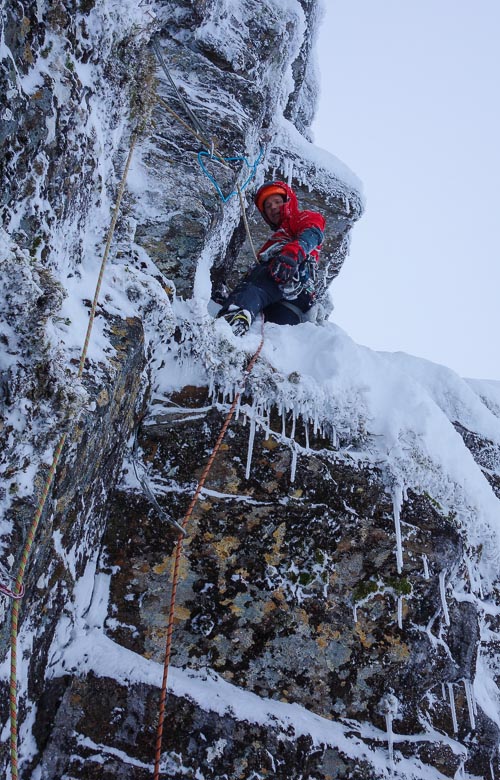 Mark Robson relieved and happy after completing the crux section of Eighties Rules (V,7) on Creag Meagaidh. Mark’s lead was particularly impressive as he said he had not done a pull up for over a year. (Photo Roger Webb)

“The problem with writing a book like Chasing the Ephemeral,” I reflected, “is that everyone expects you to to make optimum route choices all of the time.” I was half way up the first pitch of a new line on the Aisre-Chaim buttress in Coire Choille-rais on January 4, and was having a tough time. The route was in good condition except for one thing. It was covered in two to three feet of dense powder snow that had blanketed absolutely everything. It was impossible to distinguish rock from frozen turf, and finding protection was close to impossible. Climbing conditions were very unhelpful and I was not a happy man.

It took two hours for me to scrape, dig, grumble and curse my way up the first pitch and when I belayed under the crux corner – which looked far steeper than I’d hoped – I thought it was game over. But Mark Robson was not going to give up easily, and he racked up in a determined mood. Fortunately the crux section was overhanging which meant that only minimal digging was required, but even so it was a forceful lead by Mark fully deserving of high end tech 7.

Roger Webb led the third pitch that sported an ominius-looking bulging chimney-slot at its top, but Mark and I were not unduly worried as Roger is good at this sort of thing. A flounder up the final snow slopes led us to the plateau and a quick descent down the adjacent gully saw us back at the lochain in double quick time.

We had snatched success from the jaws of defeat, but I suspect that my venue choice could have been bettered even though I had carefully chosen a mid-altitude venue that was sufficiently high to be frozen, and not (theoretically) too blutered by snow. Conditions over much of the Highlands are tricky at the moment. There is a lot of unhelpful snow, but on the plus side it is lying in useful places – we just need a short thaw followed by freeze to consolidate it all. Here’s hoping!