Posted on December 24, 2017 by Simon Richardson 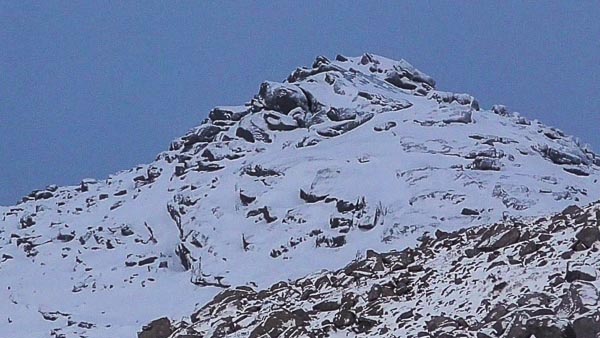 The upper section of Capuil Ridge (I) on Bheinn Bharrain in Arran. This remote ridge in the Western Hills may not have seen a winter ascent before this December. (Photo Kris Lennox)

Kris Lennox sent me details of an enterprising outing on Arran on December 9 when he made a winter ascent of the South-East Ridge of Bheinn Bharrain in the Pirnmill Hills. Kris doesn’t think this very remote feature has been ascended in winter before and proposes the name Capuil Ridge and rates it ‘mild Grade I’.

Kris who describes himself as a ‘runner first and climber a very distant second’ approached from the north up Glen Catacoul – a 12km-long run with half the distance over rough trackless terrain. He carried a sack with ice tools and changed from running kit into winter climbing mode below the route.

“The real fun of the ridge is tackling all outcrops on the rocky lower section,” Kris explained. “The central section is little more than a walk. And near the top there’s a nice little exit gully, finishing directly on the summit. Views, as can be expected, are spectacular!“

Kris has documented his ascent on his blog, which is devoted to long distance running in the Ayrshire and Arran hills. After his brief foray with winter climbing, Kris is now fully back into his running again:

“It’s been a busy month of hard training and fast runs, from setting a new course record of 4hrs 27min 21sec on the Three Lochs Way to running a tough trail marathon on Arran a few days later (one I had planned for a long time, tying together all the northern glens), to the Capuil ridge (relatively tame and short day by comparison), to exploration of Arran’s remotest regions over some of the island’s roughest terrain. Weekly running mileage is c.100-140 miles, with around 50 of those in the mountains. I have a very committing solo winter mountain ultra planned that I need to be at my peak for – if it goes wrong, It’ll likely be the end of me. Hence doing everything in my power to (hopefully) make it a success!”

Simon Richardson is a passionate Scottish winter climber
View all posts by Simon Richardson →
This entry was posted in New Routes and tagged Arran, Kris Lennox. Bookmark the permalink.