Posted on February 22, 2016 by Simon Richardson 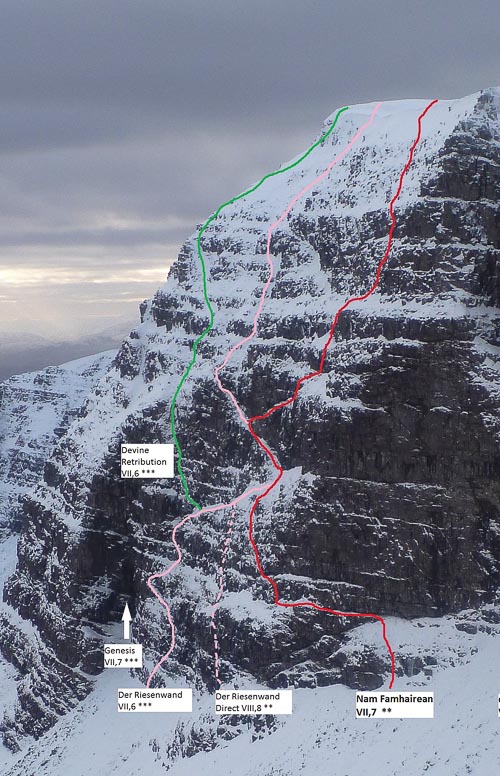 “A big route on a big cliff!  That’s what went through my mind when Malcolm, Simon and I chatted about targets for a North West trip as a plan B for our planned alpine trip, postponed due to too much snow.

The plan was clear a new line up the unclimbed ground on the right hand side of the wall of which Der Riesenwand takes the left hand side. We had identified that a thin rightward rising traverse half wall up the face would probably be the key to gaining the upper part of the wall.

The forecast was good and the prep work done but would the traverse go and what would the ground be like after that? We had to get on it to find out!

The initial barrier wall is an early reminder of the steepness of the cliff and we had planned an more straight-forward approach bypassing the steep initial wall, but the thin traverse in from Gully of the Gods meant we were roped-up earlier than we expected.

Much steepness loomed above, but the planning was working as Malcolm gained a rising weakness and made good progress to the ‘hairpin’ of Der Riesenwand.

The crucial traverse out right from Der Riesenwand that we hoped would give entry to the upper right hand wall had been hard to read from the ground . From different angles it had given different impressions of its size and substance.  On arrival at its start we found the narrow gangway to show promise, but a very thin crux section visible from the belay was sure to be the key.

We paused at the belay for a momentary check around the team knowing that the next step onto the upper wall would be committing us to whatever we found round the corner and out of sight.

Malcolm took up the baton and headed off speculatively from this relative safety. The crux section was complex and time-consuming, concealing its secrets until fully committed.  Malcolm prepared patiently; gear in, gloves off, and then, ice-tool in teeth,  he disappeared from sight. A silence fell with tools largely useless on this section, but crucial for its completion. Finally the call came back – ‘It’s done. Looks good… as far as I can see!’

Malcolm brought us across the traverse and I led off upwards steeply on ice to a small bay with tempting options in the darkness to left and right. Directly up looked hard but good, and after a small questioning of myself I decided straight up was the way with a fine crack tempting me upwards and allowing me to dismiss the other unseen options.

This long pitch, and the next, gave excellent climbing on ice and frozen turf. The ground was steep and intimidating, but in the dark you lose yourself in the climb, making progress ever upwards with the prospect of success creeping into your mind. I was reminded of C.Joybell C. – ‘Remember when you think you are seeing giants, they may not be giants at all; perhaps it is you who is the dwarf.’

Almost too soon we were on easy ground with the cornice in view and a moonlit Beinn Bhan summit awaiting our celebrations.”