Posted on February 23, 2016 by Simon Richardson 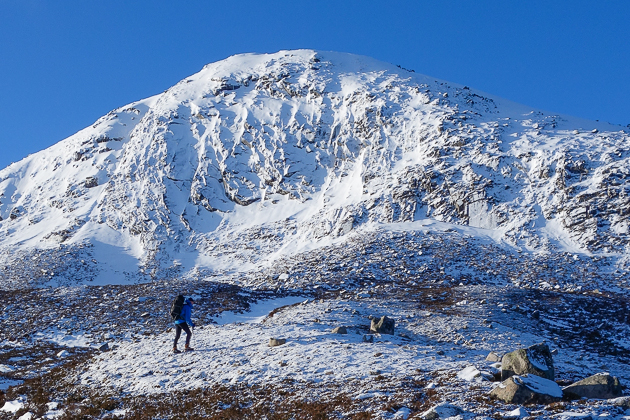 Roger Webb approaching Cnapan Nathraichean on Lochnagar. White Mamba (V,4) takes the narrow right-slanting groove directly above Roger ‘s head and is based on the summer line of Green Mamba that was first climbed by Dougie Dinwoodie and Adhair McIvor in June 1976. (Photo Simon Richardson)

I’m terrified of snakes so Cnapan Nathraichean (the knoll of the adders) on the north side of Lochnagar has never been one of my favourite crags. One time when I was below the cliff in summer a large female slithered past me on top of the knee-deep heather, and I spent a nervous day with my eyes peeled in case I encountered another.

I was nervous too when Roger Webb and I approached the cliff on Thursday February 18. A better than average avalanche forecast had drawn us to the Southern Cairngorms, and I had a hunch that the brief thaw on Tuesday night would have consolidated snow and ice in the summer route Green Mamba. Without doubt this 110m-long smooth groove is the line of the crag, but just powder-covered rock would mean game over. Fresh snow covered the crag and we were kept guessing until we were almost at the start of the groove when tell-tale patches of grey ice became visible under the white coating.

We climbed the route in three long pitches. There was ice (albeit very thin) where it mattered, and the sequence of bulges on the second pitch were protected by cams and wires in the cracked right wall of the groove, but even so it was a spooky climb to lead. Roger observed that it was a route where the “numbers were the wrong way around” and we had no hesitation in grading it V,4. We took a more direct start to the summer line so decided to call our route White Mamba. Given the pristine wintry conditions of the day, we really didn’t have much choice!