Posted on February 21, 2016 by Simon Richardson 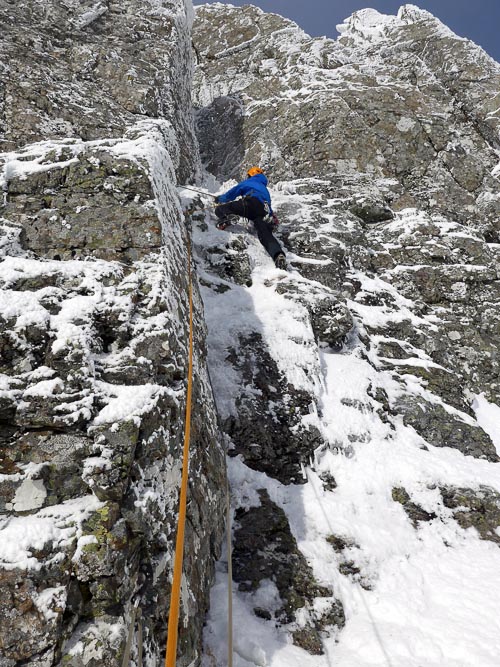 Simon Richardson entering the hidden slot on the first pitch of the central buttress of Stob a’Ghlais Choire at the eastern end of Glen Coe. The crest of the buttress then led directly to the summit and provided an excellent VI,6 mixed climb. (Photo Roger Everett)

After enjoying some excellent summer scrambling on the north face of Sron na Creise one autumn day, I set off for the round of the three Black Mount Munros. Looking back along the summit ridge of Creise I was struck by a rather shapely crag on the south-east side of Stob a’Ghlais Choire, and in particular its central buttress that looked a magnificent winter objective.

Hamish MacRobert’s 1952 Central Highlands Area Guide reveals that Dan Piggott added a rock climb finishing directly on the summit, but other than that there is no record of any climbing on the cliff. It has been lurking on my to do winter list for some time now, and it seemed the perfect option for Roger Everett and I to try on February 15.

Although the crag is visible from the Glen Coe ski area, it is rather awkward to reach. The shortest approach is from Glen Etive over Sron na Creise, but we were wary of descending steep slopes to the foot of the crag and unsure about the initial river crossing. Instead we chose to approach from the ski area, and make a long traverse around the head of Cam Ghleann to reach the corrie below the cliff. Our approach, in sometimes-awkward conditions underfoot, took three hours, but I’m sure there are faster ways.

Our toil was rewarded by a magnificent climb up the crest of the buttress. We were worried about the first tier, that looked very blank and steep, but fortunately there was a hidden slot to its right, which provided a reasonable (albeit sometimes bold) way through.

Above, a succession of steep chimneys and grooves, interspersed with comfortable belay ledges, led all the way to the summit cairn where we basked in the afternoon sunshine before heading back home over the summits of Creise and Meall a’Bhuiridh.

The buttress is about 100m high and we climbed it in four pitches at a grade of VI,6. Given its visibility it is difficult to believe that nobody has ventured on to this little gem before, so if you know of a prior ascent please get in touch.