Posted on February 19, 2016 by Simon Richardson 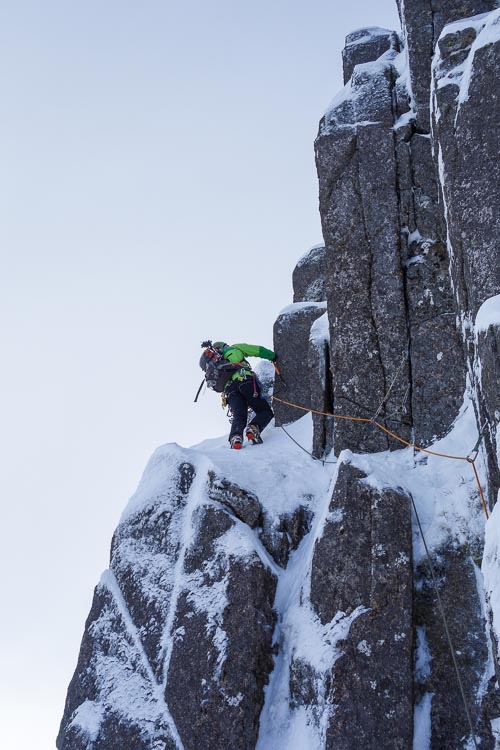 Roger Everett on the first ascent of The Borrowdale Conundrum (III,4) on Ben Starav. This is one of two new routes added to this fine mountain at the head of Loch Etive. (Photo Simon Richardson)

Several years ago Roger Everett suggested there might be some winter climbing on a buttress on the North Ridge of Ben Starav, and in November 2011 we went to have a look. Winter had yet to arrive that year, so after looking at the buttress from below and agreeing that we should return some day, we climbed over the summit and made a summer ascent of Hidden Ridge, the Graham Little and Dave Saddler Grade IV that is becoming something of a mini classic.

On February 14, nearly five years after our reconnaissance, Roger and I finally made it back to Starav. The approach through crusty snow over deep heather took nearly four hours, but we were rewarded with two lines up diverging grooves up the front face of the buttress – The Borrowdale Conundrum (III,4) and The Starav Enigma (V,6).

The route names need a little explanation. During the walk in Roger was reconciling the length of our approach to the likely length of climb, and recalled a comment in the introduction to a recent Borrowdale guidebook that stated that it was becoming unsustainable to record the large number of short and remote climbs that had been developed in the area.

Both our routes were barely more than 60m long and arguably could be classed as ‘Borrowdale conundrums’. But there again, the climbing was good and Ben Starav is a beautiful place, and for us, this more than compensated for any lack of stature – hence The Starav Enigma.