Posted on February 13, 2016 by Simon Richardson 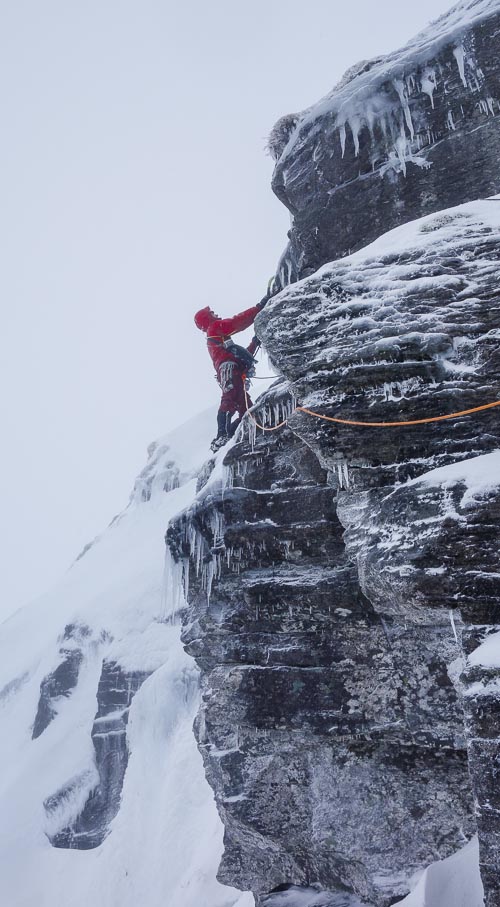 Henning Wackerhage on the improbable undercut prow of The Seven Ages of Man (V,5) in Corrie Farchal in Glen Clova. The route takes the prominent buttress on the left side of the cliff between the gullies of Age Before Beauty and The Art of Growing Old Gracefully. (Photo Simon Richardson)

Sunday February 7 was not a particularly nice day but time was running out for Henning Wackerhage and I. After 19 years in the UK, Henning is set to return to his native Germany in a couple of weeks time to take up a professorship in Munich, and there were still some outstanding lines in Corrie Farchal to do.

It was snowing hard and it took us a time to find our objective, the buttress to the left of the gully of The Art of Growing Old Gracefully. This is defended by steep bands low down and at mid-height, but in typical Farchal style the rock was surprisingly helpful and some steep moves up undercut twin cracks led through the first crux. Henning then confidently threaded his way through the improbable undercut prow of the second band that led to a third pitch of simple snow slopes and the top. We debated the grade a little, but to me The Seven Ages of Man felt like a V,5 experience overall even though the crux sections were steep and technical.

Four days later on February 11 we back in better weather. This time we had our sights set on a long sought after goal – the overhanging front face of the buttress above Farchal Ramp. This is arguably the finest feature in the corrie and was first climbed by Alex Thomson and Jenny Hill in January 2015 with Age is Only a Number (III,4), a brilliantly devious line taking hidden chimneys and ramps on its right side. But the front face is the real challenge, and tantalisingly it is cut by a diagonal crack. The problem is that it is difficult to judge the angle from below as the buttress is covered with overhangs and impending corners all leaning the wrong way and festooned with hanging icicles. Looking up it is like an impossible Escher drawing and any route through seemed highly improbable, but diagonal lines can sometimes cut through remarkably steep ground and the only way to find out was to give it a try.

We soloed up easy ground to Farchal Ramp and then Henning led a slanting chimney-slot, stepped over the chimney of Age is Only a Number and continued up the ramp above to a narrow ledge with the headwall bulging above. From directly below we could see the crack cleverly threaded its way through the steepest overhanging terrain but it was still the wrong side of vertical. Unfortunately it blanked out for the first three metres or so, which meant there were some delicate moves on thin ice on the left wall to get established. Once in the crack itself, it provided one of those unrelentingly strenuous pitches where every move is Tech 7, and just hanging on to place the gear feels as hard as the climbing itself. Finally a good hand jam at the top allowed a swing left to a good ledge. Henning led a short vertical icefall to finish and The Age of Enlightenment (VI,7) was finally in the bag.

We had time for one more route, the discontinuous gully line left of Farchal Gully, which provided three excellent sections on steep ice and a chance for Henning to use the route name he’d been saving for his final new route – The Last Hurrah (IV,4). There was just time to sprint back to the car and drive back for Henning’s farewell climbing dinner in Aberdeen.

Henning has spearheaded the development of winter climbing in the Angus Glens in recent seasons and has been a prominent figure on the North-East climbing scene for the last ten years. His boundless enthusiasm, superb photography skills and awesome fitness on the hill will be missed.