Posted on February 9, 2016 by Simon Richardson 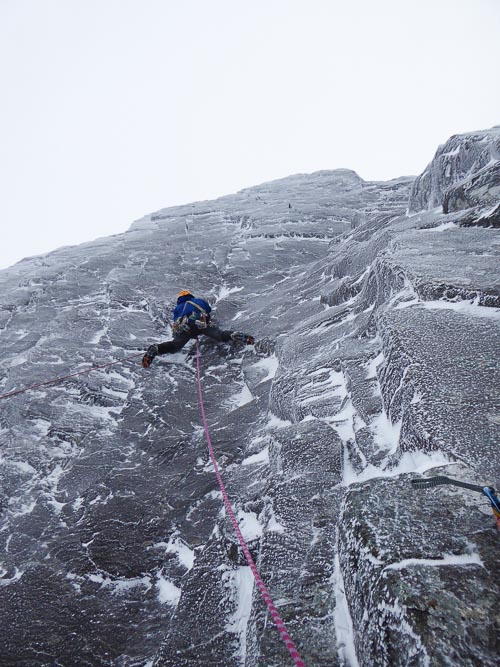 Iain Small making the third ascent of Tomahawk Crack (VIII,9) on Ben Nevis. Greg Boswell and Adam Russell made the first ascent of this daunting line on Number Three Gully Buttress in November 2012. It was repeated by Andy Inglis and Will Sim in December 2014. (Photo Murdoch Jamieson)

Iain Small and Murdoch Jamieson made the third ascent of Tomahawk Crack (VIII,9) on Ben Nevis on February 3.

“It had some pretty technical climbing which was hard work to protect as everything was a bit icy,” Iain told me. “I think the Secret only deserves VIII,8 when compared to this at VIII,9. There were quite a few teams about. Folk were on Archangel and Avenging Angel Direct. Canadians Jon Walsh and Michelle Kadatz climbed Knuckleduster, which had been our first choice, but clearly we need to get up earlier! We saw them back at the hut and Jon said was really enjoying being back on Scottish mixed even in the wild conditions that we were having. He said he had never actually had to climb routes with goggles on before!”