Posted on November 4, 2010 by Simon Richardson 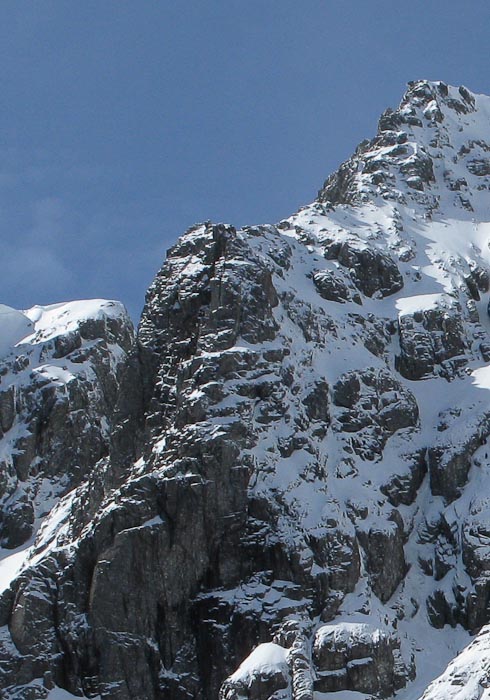 Pinnacle Arete on South Trident Buttress, Ben Nevis. Andy Huntington and Robin Clothier climbed a direct line up cracks and chimneys on the crest of the steep middle tier of the buttress. (Archive Photo Simon Richardson)

More details on the Huntington-Clothier direct ascent of Pinnacle Arete climbed on October 23 on Ben Nevis reported in Tuesday’s post. Rather than follow the normal winter line, which moves right on the second pitch into a corner on the right flank, they climbed the crest directly. A steep wall, crack and steep narrow chimney led to a bold exit at the top of The Clanger resulting in a tricky 35m IV,6 pitch. They then continued to the plateau  in two pitches via the normal route.

Two days later, Andy Nisbet and Alex Kelly made the first ascent of Rosslyn Chapel (V,7) which takes the shallow groove and roof system at the head of Spiral Gully in Coire an t-Sneachda. “It sounds minor, but it gave me quite a buzz,” Andy told me. “The route was very steep but the rock was amazingly helpful!”