Posted on November 2, 2010 by Simon Richardson 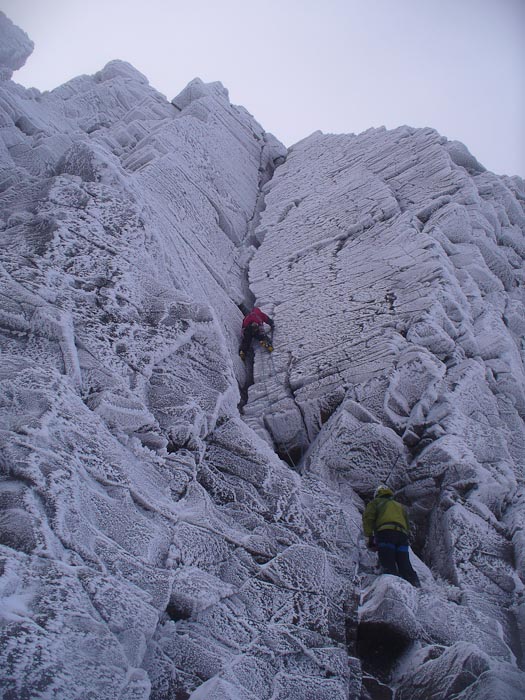 Helen Rennard and Andy Nisbet kicking off the new winter season with an ascent of the classic Savage Slit (V,6) in the Northern Corries on 20 October. (Photo Joris Volmer)

The new season began on Wednesday October 20 with an ascent of the classic Savage Slit (V,6) in Coire an Lochain by Helen Rennard and Andy Nisbet. An early start meant they were first on the route that had another ascent that day. On the other side of the country, Martin and Alex Moran together with Francis Blunt climbed the modern mixed test-piece Babylon (VII,7), high up on Number Three Gully Buttress on Ben Nevis.

After a stormy week, the weather settled down on Sunday 24 and Monday 25 October, resulting in a couple of days of superb early winter conditions. Many classics in the Northern Corries were climbed such as Belhaven, White Magic, Fallout Corner, Appetite for Destruction, The Seam and Pygmy Ridge. Further afield, the East Buttress of Beinn Eighe saw an ascent and Andy Huntington and Robin Clothier climbed a direct version of Pinnacle Arete on Ben Nevis.

Later in the week, normal service was returned with rain and gales, but the early start to the season bodes well for another hard winter!