Posted on November 26, 2015 by Simon Richardson 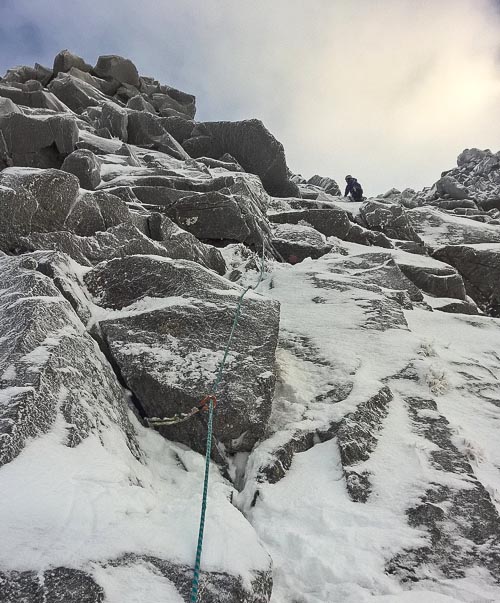 Andy Nisbet on the first ascent of Strictly Come Swimming (V,6) on Lurcher’s Crag on Cairn Gorm. This sustained three-pitch outing shows there are still good new early season routes to be found even in the well-travelled Northern Cairngorms. (Photo Steve Perry)

“Early season new routes are hard work,” Andy Nisbet writes. “For a start, not many places are in nick, and you did those routes last year. High in the Cairngorms is obvious, but there aren’t many new routes left. Actually I thought there were none, but sitting at home watching the snow fall outside my window made me think harder and just wonder if there was a possibility near the hopelessly smooth slabs we’d seen ice glazed from last year’s ascent of Beagle Has Landed, on Lurcher’s Crag. So out with the photos, zoom in on the computer screen, and there did seem to be a gap between the slabs and the ridge to its left (Dotterel).

We have it easy these days. Robin Campbell mentioned on Facebook that he’d climbed a gully there with Fred Harper in the 1960s – it turned out to be the first ascent of North Gully, a classic Grade III. No doubt they cut good steps, but I doubt they dreamed of picking out new lines on a computer screen.

Step One achieved, but was the route in nick? Friday (November 20) was an afternoon walk in to Sneachda just to see if there was any snow. Turned out everything was white and walking boots weren’t ideal footwear. I thought I must be alone on a wild day but friends were climbing The Seam out in the mist. Saturday was improving weather but was the turf frozen? We didn’t arrive in the Car Park until after 10.30am because the road had been closed for unusual ice, so there was only time for a quick Opening Break, but the turf was frozen and Steve Perry and I were really after the line on Lurcher’s.

Sunday November 22 had a good forecast and we left home a little earlier. There had been a little snow overnight so we expected the road clearing to delay things, but it seemed to take forever and it was approaching 10am before we got to the Car Park. And there was a lot more fresh snow than we expected, so it was a great relief to find plenty of footprints leading out towards Coire an Lochain. Alas, the days when I was keen enough to walk from the bottom are gone, or maybe the earliest team just dossed up there.

It was really a surprise just how much fresh snow there was; the forecast had said less than the previous front, and it hadn’t snowed much low down. It just proves that winter climbing rarely goes to plan. But we had the man who broke trail over all the Munros in winter, although we still didn’t reach the crag until noon (must take a map next time).

We ploughed our way down Central Gully and traversed to the start of the line, which actually looked quite easy; I soon found out that it wasn’t. Lurcher’s is a mixture of very helpful cracked blocks and compact slabs, a bit like a turfy Hell’s Lum.

An initial large flake proved that slabby ground is usually steeper than it looks from below, and the groove above was most certainly steep. I was glad I’d added the pegs to the rack at the last minute, as a bombproof runner let me concentrate on the moves. There wasn’t much for the feet so it was better to move quickly than hesitate and let feet slip. The placements were good except one, and turf was soon reached. A fierce pull led to an easy section and a big overlap. This seemed to have good cracks but I didn’t have enough strength to pull over the lip and in the end, a foot slipped and I was back to square one. It would have been worth a more dynamic attempt but there was another option, just dependent on whether the snow slope on the right was a smooth slab or not. Clearing with my feet revealed a wave at its top, probably just enough for feet to stick and a reach into a groove.

This groove did have some turf, although a bit soft under the snow, and it led into another deeply buried groove. By now the runners under the overlap felt rather distant and all the visible cracks were blind. Mind you, not much was visible, so some digging was required and soon a pod with a 50:50 nut was uncovered. Enough to start me into the groove. More clearing revealed a peg, which went a third of the way in (I’d used my thinner one below). Working on the idea that any fall would be gentler on to soft snow, it was another case of concentrating only on the moves. In fact there was good turf over the top and belays were reached just as Steve’s calls from below were getting more urgent.

Time was getting on so I was becoming anxious about daylight when he joined me. Above looked steep and smooth, so another snow slope hiding a smooth slab seemed the best option. It felt a bit like friction climbing in crampons but with some good cracks in a central groove tempting him on, he managed to ignore a long potential slide and gained the groove with its runners. Everything now steepened up but runners and turf speeded him up.

I love through routes and there was one under a huge block in the final tier. But in the end it wasn’t worth taking off harness and helmet, so I climbed over the top and easier blocky ground led to the final ridge of Dotterel. It was a pleasant surprise to get an independent third pitch, even more so to be in daylight, and we reached the sacks in the final gloom.