Posted on February 13, 2015 by Simon Richardson 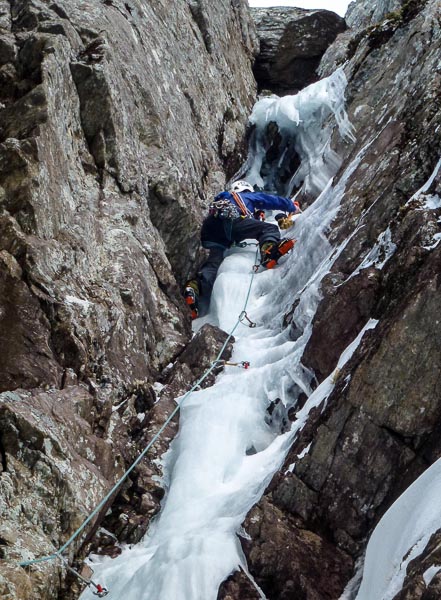 Steve Perry on the first ascent of the Right-Hand Branch (VII,7) to Bottleneck Gully on the West Face of Aonach Beag. The crux ice umbrella above Steve’s head was protected with an upside down ice screw. (Photo Andy Nisbet)

“February 7 was day three of seeking out unclimbed ice by moving south and higher as the warm air encroached, “ Andy Nisbet writes. “The lower west face of Aonach Beag was chosen, and in particular a line that Sandy Allan and I had spotted when we had only blunt gear and no ice screws, and for which I went back later with Jonathan Preston but the bottom had thawed away. Ice at that altitude was in great shape on the Ben (like The Curtain and Gemini), so why not here? A distant photo on the SAIS Lochaber blog didn’t show much ice, but then ice does hide away in deep grooves.

As Steve Perry and I approached over the Bealach Cumhann, the first noticeable feature was a continuous white streak in the right branch of Bottleneck Gully. I had a feeling that it must be steep, as Simon Richardson and Roger Everett wouldn’t otherwise have missed the chance, but the ice was definitely complete up to a big chockstone at the top. Walking conditions were surprisingly good compared to the deep soft snow of previous days, so we took the regular route up the steep approach slopes, even needing to put crampons on. Despite the temporary inconvenience, this was of course a huge plus for conditions and showed the temperature was lower than expected.

We arrived at the crag under the gully, which was our back-up plan. This is the gully I had assumed was Torquing Nonsense, but after Simon had retrieved a topo following the first ascent out of his attic, it seemed to be unclimbed. I’d told Steve it would be a short ice pitch and then easy, so it was a bit surprising to see it packed with ice both in the gully and a long continuation through the upper rocks. It was impossible to resist and gave a fine 120m Grade III, called Axiom because it wasn’t talking nonsense (and used axes).

It was now convenient to head down the descent and see if our planned icefall was there. I don’t know how I could have doubted, as there were huge amounts of ice. This icefall is on steeper ground left of Prominent Chimney. Sandy Allan and I had previously climbed Prominent Chimney, thinking it a new route, with our Grade III being very different to the IV,6 in the guide. But chatting to Roger Webb, I found that conditions were lean on the first ascent and that the Tech 6 section was Grade I when banked out.

We soloed up to a big spike at the base of an ice-filled chimney some 15m left of Prominent Chimney. Steve set off up the chimney and then a tight corner with ice in the back and fortunately some footholds on the right. Now he could go right to the main icefall and I was hoping he would belay. But there was no stopping him and he powered up the icefall with several ice screw runners (he had brought a lot) to an easier finish. I called it Santa (V,5) as a late Christmas present. It also fitted with an ice line well to the left on the same buttress which Sandy and I had climbed (Elf, Grade III), and a mixed line on the right edge, earlier climbed with Jonathan (Dasher, Grade III,4).

Time was getting on but the light lasts longer now, so we headed down to the right branch of Bottleneck Gully. I got there first and my heart sank at the sight of a big ice overhang near the top, complete with its own ice umbrella. I estimated the roof at about 6ft horizontally out, but Steve saw it at a more optimistic scale and reckoned you could bridge it (so a 4ft roof). He was willing to give it a go and I was willing to hold his ropes.

I managed to find a belay out of the firing line (there would be a lot of ice coming down from the umbrella) and he set off. It was clearly very steep as progress was slow and a lot of ice screw runners were placed; Steve’s stamina was impressive. The light was getting a little gloomy as he made the roof. I thought he’d be able to rest in the cave below it but it was too steep. A nut between two icicles and an ice placement in the back allowed him to lean out and start dismantling the umbrella. After a few whacks and a lot of debris, it was time for a go. With considerable contortion, an ice screw was placed in the roof and gave enough confidence to lean out. The first swing of the axe brought down a large chunk of ice and a painful shoulder. After a few retreats (I’ve never trusted to an ice screw placed vertically upwards in an ice roof either), he finally committed with a comment that there would be no coming back. Fortunately there was a foothold on the right wall but very little on the left, but a semi-chimneying position allowed him to lock off and reach for higher placements and a piece of turf on the right. A wild move gained a flake but no rest as a huge chockstone above pushed him out. After a moment’s contemplation about going up, he swung back on the turf and made a long move for turf on the other side of the gully. The upside-down runner was quite distant now so there was extra power for a final pull on to easier ground.

I didn’t notice the glorious red sky as I climbed as fast as possible, pulling hard on everything and trusting on the rope above. I didn’t even contemplate how overhanging the top section was and fortunately everything held. An easy last pitch was led at high speed to complete Steve’s first ever Grade VII,7 lead. I hope the buzz will last for a while.”