Posted on February 14, 2015 by Simon Richardson 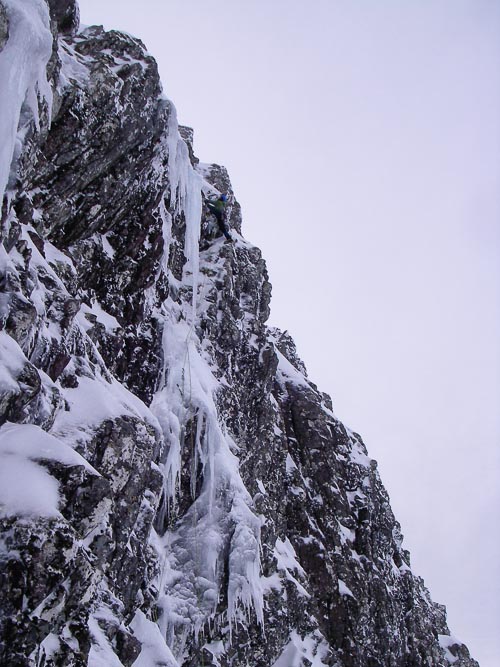 Michael Barnard nearing the top of the Superdirect Finish to Nordwand Direct (VI,5) on Ben Nevis. The Nordwand area on the North Face of Castle Ridge has been particularly icy in recent weeks and there have been numerous ascents of the classic Nordwand (IV,3) and Nordwand Direct (IV,5). (Photo Brendan Croft)

Michael Barnard and John MacLeod climbed an exciting new pitch high on the North Face of Castle Ridge of Ben Nevis on February 7.

“For the most part we took a line approximating Nordwand Direct,” Michael told me. “We started up the fine icy groove just right of the initial icefall, which gave a good long pitch of IV,4/5. Although it’s not mentioned in the guidebook, this clearly sees plenty of ascents when in condition (I saw the odd pick mark). Being a more independent line, I wonder if this would be a better way to describe the Direct?

As we continued up, we noticed an impressive icy feature in the upper headwall, so we made a beeline for that. An icefall had formed down a hanging slab, while an icicle hung ominously above. Clearly the icicle wasn’t going to go, but a right-slanting ramp looked like it might allow passage through the upper wall, so the main uncertainty was the icefall below.

I climbed up to it but with the only rock protection some way below and the ice too thin for screws, discretion won! So I took some steep mixed ground to avoid the main part of the icefall (though still without gear) to where I would have to get onto its top section. Here the ice had helpfully formed over wee bulges and created a short two-stepped ramp, but these things can be awkward with the feet-off kilter with the axe placements. Still, those placements seemed good so I moved onto the first step and became committed. By now the runout had become too much of a worry and I spent a long time equalising three ice screws. As it turned out, this gear was pretty good and the next move, once attempted, was fairly straightforward but that’s hindsight for you!

I then went behind the icicle and the ramp granted safe passage up and right. A pull over on bomber turf took us to an easier icy finishing groove. We called our new 30m pitch the Superdirect Finish to Nordwand Direct and graded it VI,5.”