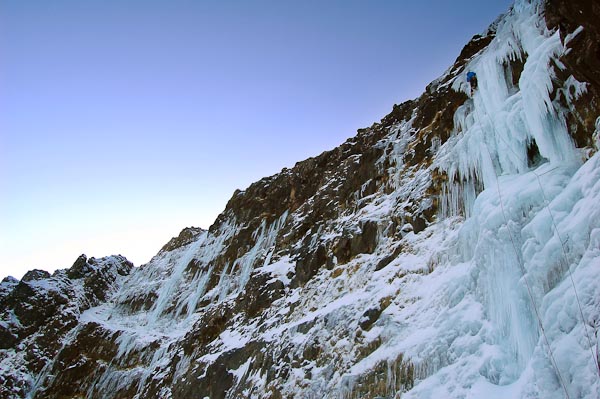 The vertical basalt cliffs of Coire Scamadal on the north side of The Storr in Skye are dripping wet most of the year but have the potential to be a natural ice trap. Facing north-east, and easily visible from the main road north of Portree, they have attracted the attention of ice climbers over the years, but most have been thwarted by their relatively low altitude and proximity to the sea. They were eventually breached by Mike Lates who climbed an icy gully cutting through their left side in two instalments in the late 1990s. Scamtastic (V,5) saw a second ascent by Mick Fowler and Dave Turnbull last season.

Well aware of the potential of the corrie, Mike was determined to return as soon as conditions became good. The cliff started to ice through December, and finally after New Year the ice was thick enough to climb. On the January 4, Mike enlisted Andy Huntington for the first ascent of Top Scam (V,6), the central ice line topped by an ice umbrella. Lates returned four days later with Martin Welch to add Scamadaladingdong (IV,6), the prominent icy recess to the right of Scamtastic.

Other teams had been alerted to the potential, and on Saturday January 9, Robin Clothier and Doug Hawthorn picked The Fine Line (VI,6), the plum route on the cliff up the vertical ice sheet on the imposing right side of the cliff. Whilst Robin and Doug were engrossed on their route, Alasdair Fulton, James Sutton and Ben Weir attempted the 140m-high central ice line right of Top Scam. They were beaten back by a wet first pitch and saved the day with the third ascent of Scamtastic, determined to return early next morning.

“The walk in was quicker this time,” Alasdair told me. “But we were not quick enough to beat Doug and Robin. They were making swift tracks towards our route until they doubled back and aimed for another unclimbed line – our previous tracks fooling them into thinking we had climbed it the previous day! This time I was going old school – Goretex instead of soft shell – and this time the first pitch was a success. It was pumpy, technical and steep. Still wet in the cave, but not enough to dampen the fire! Ben took over for pitch two, but James was still pumped from seconding with the pack, so I got the final pitch. It was harder than I anticipated, 85 degree ice and not as good for screws or feet. At one point both feet ripped…”

Whilst Fulton, Sutton and Weir were engaged on The War Path (VI,6), Robin and Doug climbed The Shard (VI,6), the huge hanging cigar to the right of Scamadaladingdong. After a brief thaw, Martin Welch and Stewart Anderson returned three days later and climbed Vertigo Gully (VI,7), the prominent incised corner on the right of the cliff whilst Doug and Ben climbed the equally impressive Slilverpine (VI,7) up the hanging chimney to the right of The Fine Line. This concluded a remarkable ten days of development and the establishment of one of Scotland’s steepest ice climbing areas. No doubt these superb routes will attract considerable attention next time we have a major freeze.