The Hardest Ice Route in Scotland? 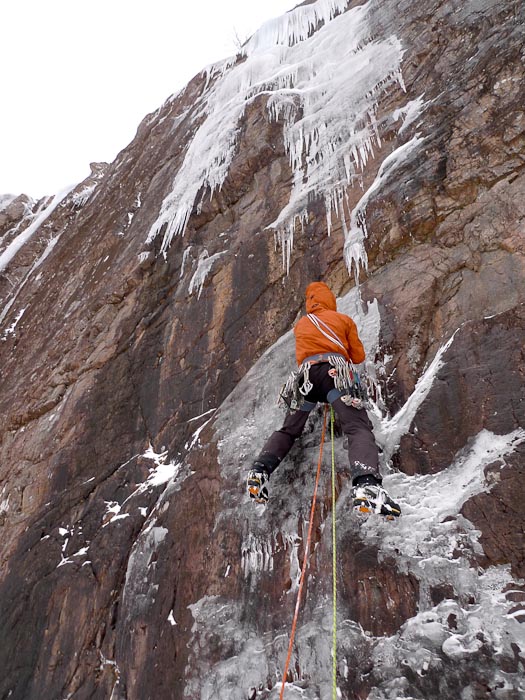 Dave MacLeod on the first ascent of Jane's Weep on Aonach Dubh, Glen Coe. At VIII,8 this is the highest graded ice route ever climbed in Scotland. (Photo Dave MacLeod Collection)

Dave MacLeod has had a productive week in Glen Coe coming away with five difficult new ice climbs. On January 8 he visited the crag right of Chancellor Gully low down on the south side of the Aonach Eagach and climbed the left-hand of vertical thin icefalls with Donald King to give Liquidation (VI,6). The route went fairly quickly, so the pair nipped up to the Lady Jane Wall on Aonach Dubh and made a rare repeat of Willie Todd’s 1986 icefall Exellerator (V,5). Dave returned to Chancellor Gully two days later with Sam Wood to climb Frozen Assets (VII,7), the rather steeper and thinner series of dribbles, pencils and hanging fangs to the right.

Whilst he was climbing Exellerator, Dave had spotted several steep ice smears forming down the Lady Jane Wall, so he returned on January 13 to investigate them with Blair Fyffe. Blair kicked off their campaign on the right side of the wall with a difficult VI,7 taking the steep crack and ice pillar just right of the summer E1 Blast Off. Dave then led the plum line, taking the thin dribble of ice running down the classic E2 Lady Jane. Difficult mixed moves and thin intermittent ice lead to the more continuous upper smear resulting in a bold VIII,8. On his blog Dave describes Jane’s Weep as a climber’s dream – “ice smears a few millimetres thick and occasional blobs running boldly up a wall, eventually gaining thicker ice to finish on an overhanging pillar.” Fully fired up the duo returned the following day to climb the overhanging groove left of Jane’s Weep. This looked the hardest route of the three, but good ice and hidden footholds, meant that Dangerous Curves merely weighed in at a tough VII,8.

Jane’s Weep is almost certainly the most difficult ice pitch climbed in Scotland. There are very few Grade VIII Scottish ice routes of that grade, and Dave Hesleden and Chris Cartwright’s Foobarbundee (VIII,7) on Liathach climbed in February 1993 is probably the closest comparison.