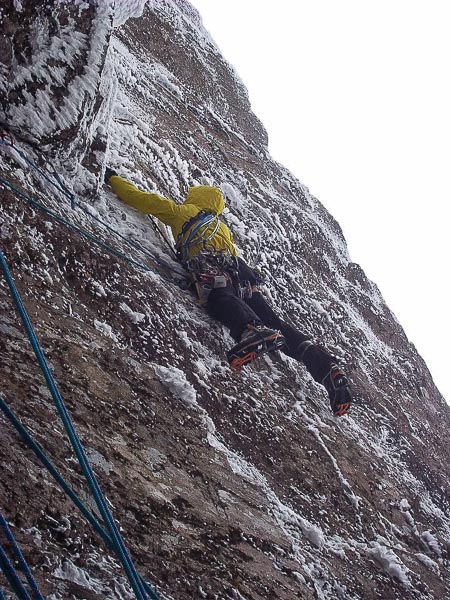 Harry Holmes leading the crux pitch of Raven’s Edge on Buachaille Etive Mor. This excellent route was first ascended in winter by Aberdeen climbers Rick Allen and Brian Sprunt during the great January storm in 1984. They avoided the crux open book corner by taking the rib to the right. The summer route was first climbed in its entirety by Rab Anderson and Rob Milne in March 1996. (Photo Harry Homes Collection)

Harry Holmes, Helen Rennard and partner made a rare repeat of Raven’s Edge (VII,7) in Glen Coe on March 26. The superb route takes the narrow buttress to the right of Raven’s Gully

“We had the mountain pretty much to ourselves,” Harry told me. “There were two other cars in the car park but we didn’t see anyone else all day. We found there to be two quite hard pitches, those being the second and third. The second pitch is a thin traverse and the third is a long sustained corner. The off-width horror show I was expecting at the top never seemed to really materialise.

I think VII,8 might be a fair grade as it felt harder than any  tech 7 I’ve done before, and was reasonably sustained. Conditions on the Buachaille were looking really good and even Ravens Gully looked nicely iced!”

“It was a great route,” Helen confirmed.” Harry did really well leading. There was quite a lot of loose rock (a big rock came off when he was leading the crux). We climbed up a very icy Great Gully to get to the route – quite an approach!”