The Battle of Glen Shiel (or maybe not) 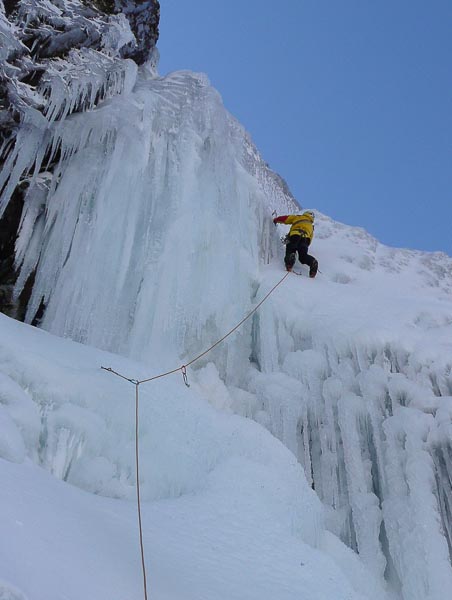 “It’s great what unusual conditions have been produced by this cold spell lasting long into the season,” Andy Nisbet writes. “When I spotted a waterfall in an unfrequented valley by Munro bagging without reading the Munros book, I would never have guessed I would be climbing it so soon. Dave McGimpsey and I wanted a short day, and this north-facing icefall at 550m in Glen Shiel seemed ideal. All it needed was a free-falling waterfall to be a frozen pillar. We parked at the site of the Battle of Glen Shiel and hoped this wasn’t going to be another day when the raiders were defeated.

So we walked south up the valley towards the east end of Creag nan Damh towards where a waterfall is marked on the 1:50000 map and hoped for the best. Rounding the final corner was a “wow moment”, as not only had it formed but it was way thicker and the route longer than I had dared hope. The aim had been to belay behind the pillar and then launch up, so we had brought a huge number of ice screws just in case. But as we arrived at the bottom, we could see that it was a wide screen, no doubt spread out by the cold gales, which we’ve had recently.

The start was some 90m of low angled ice, around Grade II or III, but a pleasant warm-up for the main event. There was obviously no gap behind the ice, so we belayed in a more photogenic position on an excellent peg. We could see that a lot of snow had blown around the waterfall as it froze, so as well as the blue ice, there was whiter coloured material which would be somewhere between an ice crust over powder and perfect chewy glue. The start, leading left towards the main fall, was somewhere in between but then improved enough to take an ice screw. As I reached the line of the waterfall, I started to hear water hitting my helmet. I could see it was only a couple of vertical moves to escape out on to a hanging slab but still felt the need to place another screw in the compacted slush which seems to form when water is still flowing. The potential soaking speeded me up and I knocked off a couple of large icicles before launching up on small umbrellas, which are typical of waterfall ice. Once on to the slab, I found the ice better than the crust below and placed another couple of ice screws before some more steep moves up left led back into the fall line. But it was all dry this time although I could see the water flowing underneath and one of my placements made a weird sucking noise when I removed the axe. Soon I was into the easier upper gully and digging out an earthy crack with my newly sharpened axes.

Dave soon joined me and headed on up to the top. It was an easy walk back down to the sacks and an easy walk down to the car. Despite collecting wood for Dave’s stove on the way down, we were back at the car at 1pm and plenty of time to be real tourists and stop at a café for tea and cake. This is what winter climbing should be, my sunburnt nose contrasting with the gales and spindrift which we often find. It felt quite exposed and the shape seemed unusually friendly, so we gave it V,5.”