Good Conditions on An Teallach

Posted on December 16, 2012 by Simon Richardson 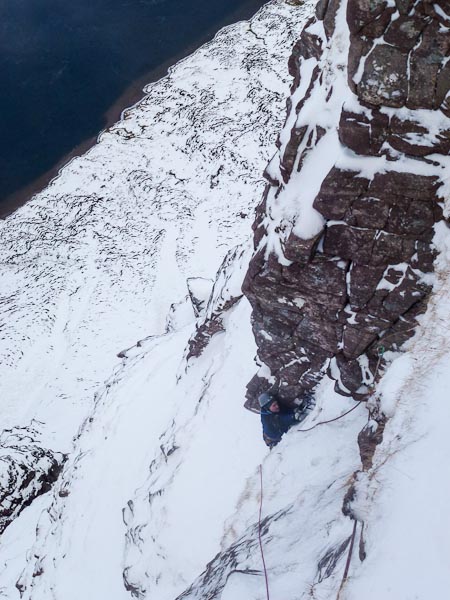 Brian Davison moving through the thickly iced overlap on the first ascent of Tweener (V,6), a new route on Gobhlach Buttress in Toll an Lochain on An Teallach. (Photo Andy Nisbet)

Following their successes in Glen Coe with the first ascent of The Pash and Incision, Andy Nisbet and Brian Davison added a new route to An Teallach on December 13. Andy takes up the story:

“Pat Ingram and I walked into An Teallach a week ago in rain, then sleet and finally sticky snow. It was a miserable day but we headed up into Central Gully to go to the gully face of Goblach Buttress and a line that I’d spotted with Jonathan Preston when climbing the buttress on the other side last year (Narrow Buttress, Grade II). There wasn’t much enthusiasm when some sticky spindrift (quite a lot actually) came down Gobhlach Buttress, enough to even put off Pat. Now with two people to forgive me, the large amount of snow seemed to offer Brian and I a good option after the thaw (despite Glen Coe at that altitude being rather bare).

As we drove over in surprisingly good light for so early (a good moon), we could see An Teallach was nice and white. The ground was frozen hard down to the road so the walk-in was easy despite large areas of ice. Once we hit the snow level near the loch, the snow turned to neve and it seemed like we’d hit miracle conditions. OK, it was more crusty on the cliff but still surprisingly good. The idea was to climb Central Gully until we could traverse left on to the route, but when we were gearing up, I could see an independent line of chimneys parallel to the gully had some ice. I’d never seen them frozen before and it wasn’t in the plan, but we couldn’t miss the chance.

Brian soloed up the first short chimney with enough energetic bridging for me to accept a rope. The second longer chimney was easier but the third was tricky enough for Brian to lead roped. Now after three pitches we were at the planned starting point and conditions were obviously very good. A blind corner had thin ice which gave a scary pitch, then a potentially tricky overlap was thickly iced and finally a very steep tier was breached by a vertical chimney with an amazing crack up its left side. Some really fine moves, especially up its bulging middle section, gave way to gradually easier terrain and two long pitches to the top of the buttress. Tweener (350m, V,6) is the route.

We were finished in good time but it had started to snow and all the ice on the walk-in was thinly covered. I don’t think I can remember such treacherous conditions, and my nerves weren’t helped by Simon Yearsley having backed out of the trip because of a bruised elbow after falling on an icy path. After bruising my own elbow, and various other parts, we had to abandon the path and walk down through deep heather just to survive. “Three falls and a submission” said Brian as we were relived to reach the car in one piece. But great conditions; pity it’s going to thaw.”

Simon Richardson is a passionate Scottish winter climber
View all posts by Simon Richardson →
This entry was posted in New Routes and tagged An Teallach, Andy Nisbet, Brian Davison. Bookmark the permalink.