Posted on December 15, 2012 by Simon Richardson 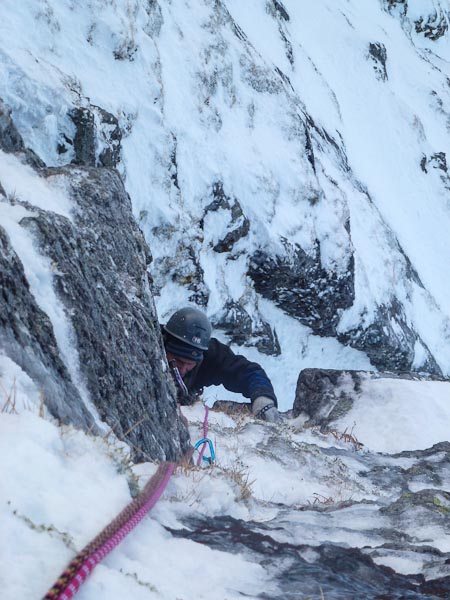 Brian Davison on the first ascent of The Pash (VI,6) – a new route on the West Top of Bidean nam Bian in Glen Coe climbed with Andy Nisbet. The same pair also added Incision (VI,7) to the crag the same day. (Photo Andy Nisbet)

“In 2001, Brian Davison made the first ascent of St. Peter’s Well on the West Top of Bidean nam Bian with Steve Kennedy and Dave Wilkinson.’” Andy Nisbet writes. “He did say there was more scope, but I didn’t remember until the preparation of the Scottish Winter Climbs guidebook when Steve sent me a picture of the crag. A steep unclimbed rib right of the chimney called The Gash caught my eye, although I didn’t realise how steep it was. A few summers ago, Brian was up [in Scotland] to rock climb but it had been raining for a few days and mountain routes would be wet, so we went for a walk up Bidean and just happened to look at the crag. In November 2010 the freezing level was high, and high new routes are rare, so I hoped Brian would forgive me going up there with John Lyall and Jonathan Preston. Despite the plan to look at the rib, it was very steep and deeply plastered, and we had a hard enough time climbing an easier line to the right (Stramash IV,4).

So time to call back Brian. There had been a thaw, actually a much bigger one than expected. “Where’s all the snow” said Brian when he arrived at Lagangarbh, admittedly in the dark. “There’s plenty up high”, said I optimistically, but at least we were going to the highest cliff in Glen Coe. It was a bit worrying when the steep walls on Church Door Buttress were black, but we were going even higher, and sure enough it was fine.

[On December 12] we soloed up to the base of The Gash’s chimney and thought we ought to try the wall on its left. It was distinctly less steep than the rib, so I volunteered, Brian conceded that he would lead the rib and I set off. Ten metres up and with only one poor runner, I wasn’t sure my deal was working out. There was a wide shallow verglassed crack below what was obviously the crux. So I put in a Friend runner and went up to look at the crux. I didn’t like it so came back down and put in another dubious runner. This procedure went on for about an hour until there were four dubious runners and I still didn’t like it. But I knew deep down I’d just have to get on with it. A strenuous pull over a bulge followed by a struggle to stay in balance with placements too low, did finally work. Then it was easier but still not enough protection to reach a big flake, which I knew, would be the end of the difficulties. I called it The Pash (VI,6) although there was more fear than love involved.

Now it was Brian’s turn. It was obviously steep and the crack went through two clearly overhanging sections, but at least it was a crack and we’d taken an excessively large rack. Brian’s claim it was very early season was ignored by me since he’d just been involved with Paddy Cave and a route with a high grade called 1984 [a new IX,9 on Flat Crags in Langdale]. I think Brian took less time on the whole route than I had on one move on The Pash, but it was still pretty strenuous so speed probably helped. Brian was using old axes with leashes and had the last laugh when my curly modern ones had the wrong curve to reach a chockstone deep in the crack; with failing strength I pulled on a runner. The route Incision has been graded VI,7 and despite my protests, I couldn’t think of another grade which worked. Technical 7 was just about right, by that I mean it wasn’t really 8, and it was too short and well protected for anything else. At least no-one will ever say it’s a soft touch.”