Posted on December 14, 2012 by Simon Richardson 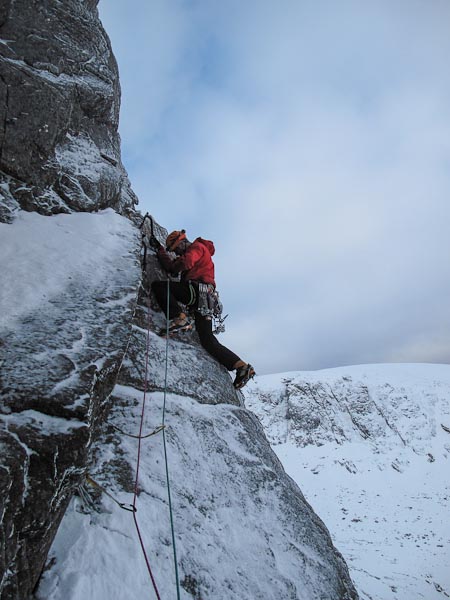 Martin Moran on the third winter ascent of Steeple (IX,9) on the Shelter Stone. This landmark route was first climbed in a 24-hour push by Alan Mullin and Steve Paget in November 1999. It set a new standard for Scottish routes of such sustained difficulty, and by deliberately climbing through the night, they redefined the approach to climbing long Scottish winter routes. (Photo Pete Macpherson)

The Shelter Stone has been in good conditions over the past few days with ascents of the classic mixed routes Sticil Face (V,6) and Postern (VI,6). Big news however is the third winter ascent of the summer E2 Steeple on December 12 by Pete Macpherson and Martin Moran. This pair are no strangers to high standard routes on the Shelter Stone. Two seasons ago Pete made the first ascent of Stone Temple Pilots (X,9) with Guy Robertson, and last December Martin made a winter ascent of The Needle (VIII,8).

“Martin and I had an incredible day yesterday on The Steeple’” Pete told me yesterday. “Rather than begin up Postern we started via the summer line, and apart from missing the 5c crux which was black (we did The Needle crux instead) we followed the true line throughout. Really sustained route from beginning to end. Martin led the corner in style, which was nails to say the least. I was so knackered seconding it with a sack that I only just managed to lead the final pitch in the dark, which was super strenuous before my hands arms and legs started to cramp up. Absolutely shattered today. I’m in college now studying to become a nurse. I think my fellow students thought a zombie had walked into the classroom this morning!